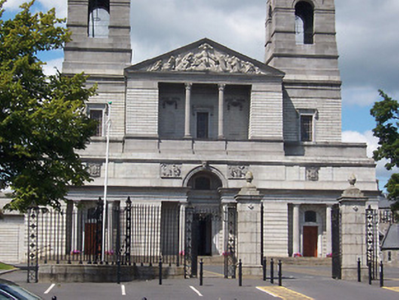 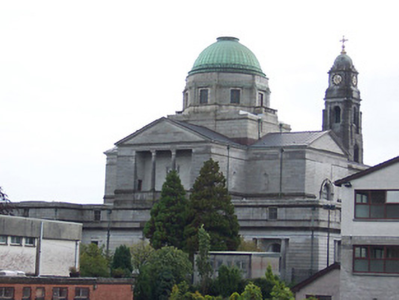 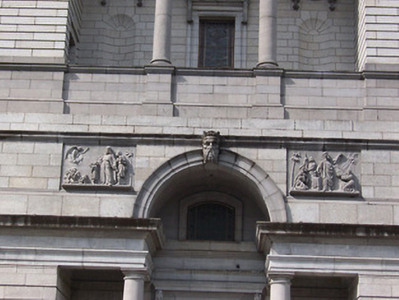 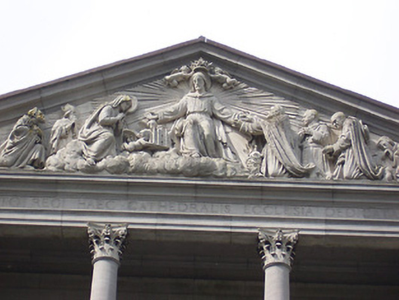 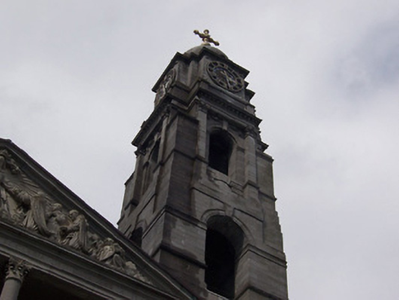 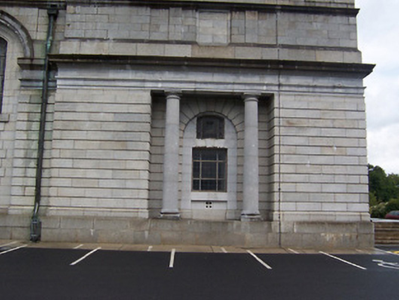 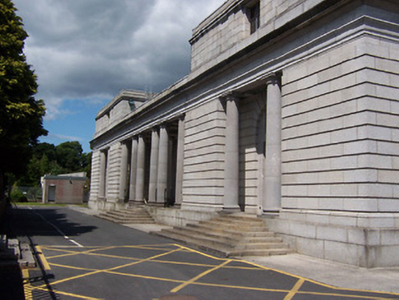 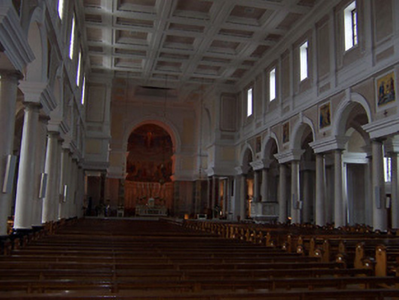 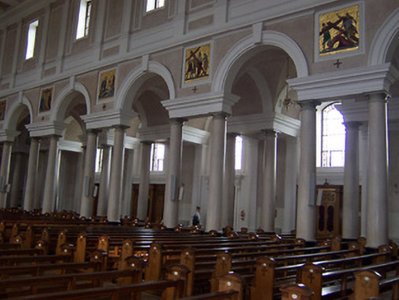 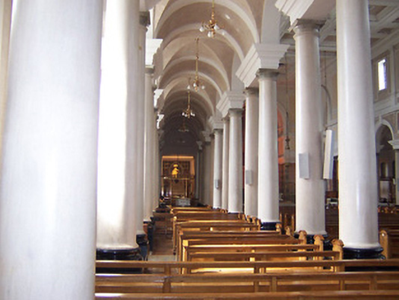 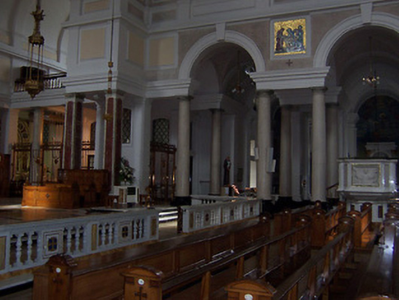 Freestanding Roman basilica-style Roman Catholic Cathedral on a complicated regular plan, built between 1932 and 1936. Comprises seven-bay nave with clerestory over and flanking single-storey side aisles (east and west), full-height transepts terminated by pediments (east and west), a broad apsidal chancel to rear (north) and a circular drum with copper dome over at the central crossing. Central two-storey block with pedimented breakfront with colonnades/loggias at both first and second floor levels to entrance front (west), flanked by single-storey blocks to east and west supporting four-storey arcaded campanile towers crowned with limestone domes with gilded cross finials over. Pitched roofs. Constructed of channelled ashlar granite with extensive ashlar limestone and ashlar granite detailing. Sculpture to pediment (tympanum) in Portland stone by Albert Power, depicting Christ the King, and a number of sculpted panels by H. Thompson of Dublin to front façade above main entrances. Variety of window openings, mostly square-headed with metal glazing bars and cut stone surrounds. Ground floor window openings to nave set in round-headed recesses. Main square-headed entrance with timber panelled double-doors, with segmental-headed window over, to centre of south façade, set behind Venetian-type arrangement of central round-headed arch flanked by lower square-headed openings (divided by Doric columns in antis). Main entrance flanked by square-headed doorcases with timber double-doors with segmental-headed overlights above, set in square-headed recesses with Doric columns supporting cornice over. Museum to interior (rear/northeast) with an extensive collection of artefacts relating to the history of the Roman Catholic community in the Mullingar area. Interesting open interior with numerous columns in various types of marble (including colonnades formed of paired Doric columns in Rochambeau marble, separated by high round-headed arches, giving access to side aisles and to transepts), an extensive collection of marble altar goods and a number of bronze fittings and railings. Seven individual chapels to the interior; a number of these are adorned by mosaics by the Russian artist Boris Anrep. Cathedral is set back from the road in extensive mature grounds with Cathedral House (15310162), the Bishop's Residence, to the northeast and a large forecourt/car park to front (south). Ashlar granite gate piers on square-plan, with cast-iron double-gates and cast-iron railings over ashlar granite plinth wall to main entrance (south). Located in a prominent position to the north side of Mullingar Town centre.

This massive and extensively detailed cathedral is a monumental statement on the confidence, power and the authority of the Roman Catholic Church in Ireland in the first decades after Independence. It has been compared in terms of architectural style and ambition to the State-sponsored architectural projects built in Germany and Italy at the same time. This grandiose structure was built to designs by Ralph Byrne (1877-1947), a prominent architect of his day noted for his academic approach to architectural design. Byrne was almost the architect of choice for the Roman Catholic Church at this time and received commissions to design the new cathedral at Cavan and St. Peter and Paul’s Church, Athlone (15000012), during the 1930s. Byrne favoured the classical idiom for much of his church designs, moving away from the Gothic Revival-style, which had been en vogue since the early nineteenth-century for Roman Catholic building projects. At Mullingar, Byrne calls on an eclectic mix of architectural styles, drawing upon the classical imperial traditions of Rome, the work of Palladio, the Italian Baroque, Webb and perhaps even the neoclassicism of James Gandon and the work of Lutyens in New Delhi. Despite this seemingly ad-hoc use of classical styles, this cathedral is a polished architectural work, the stark cold ashlar granite to the façade contrasting surprisingly well with the opulence of the marble interior. The façade is a complex arrangement of classical elements, emanating a strong message of triumphalism, being dominated on the upper storey by a pedimented temple with inset Corinthian columns. The vast open interior is reminiscent of the layout of a Roman basilica and seats over 1,800 people. It is lavishly decorated using a variety of different types/colours of marble and contains no less than seven individual chapels. A number of these chapels have mosaics by Boris Anrep (1883-1969), a celebrated Russian artist and socialite, best known for his monumental mosaics at The National Gallery, at Westminster Cathedral, and at the Bank of England, in London. The fine collection of marble altar goods and the bronze and brass fittings were designed and fitted by Early & Co., Gunning Smyth's, J. and C. McGloughlin (all Dublin) and by Oppenheimer of Manchester. This cathedral replaced an earlier building on the same site (a large Gothic Revival T-plan church with four octagonal turrets to the entrance front), which itself replaced the parish chapel of 1730. The elaborate sculptural pediment by Albert Power, over the main entrance, depicts the Virgin Mary handing over a model of the previous Gothic Revival cathedral into the care of Christ. The present edifice was built at the cost of c. £250,000, an enormous sum for the time. The cathedral was dedicated to Christ the King at the personal request of Pope Pius XI and was consecrated on the 4th of September 1939. The silhouette of this impressive landmark has become almost an iconographic symbol of Mullingar, with the campanile towers and the dome dominating the skyline and approaches into Mullingar for many miles around.