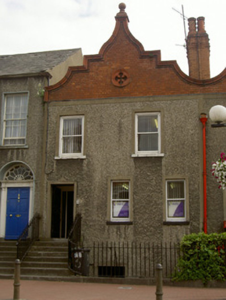 This significant early Georgian house, with the adjoining house to its west, form a striking feature within the streetscape. The shaped gables, whose red brick construction forms an appealing and colourful contrast to the rendered walling, are unusual later features which enliven the vista along Roden Place. The fine terracotta decoration and render surrounds to this house, with crowning motifs mirroring the gable pinnacle, further attest to the building's significance.