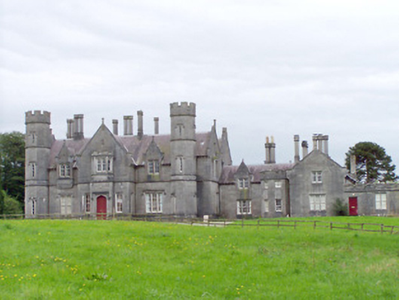 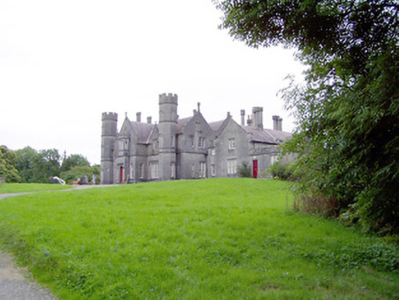 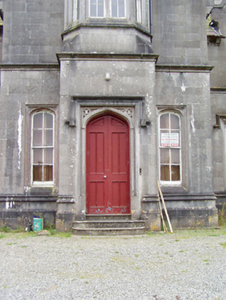 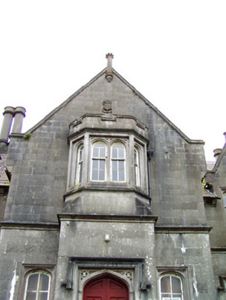 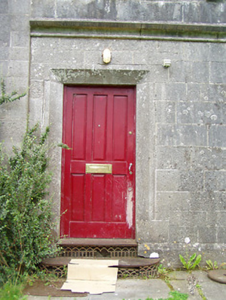 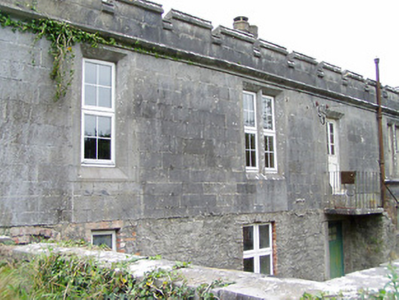 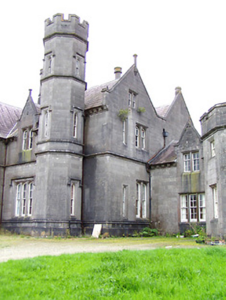 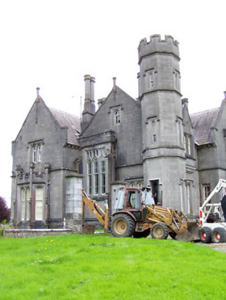 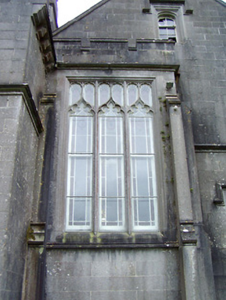 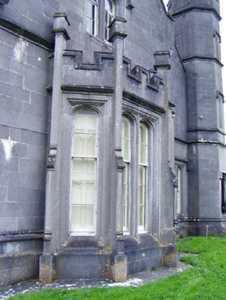 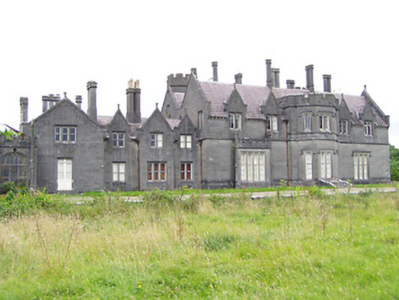 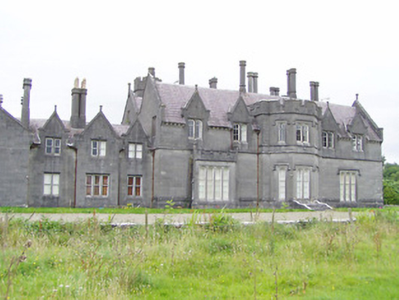 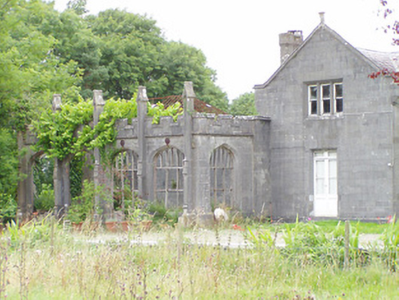 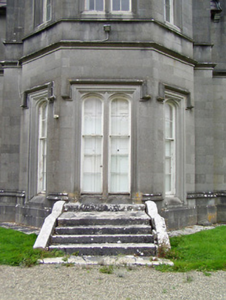 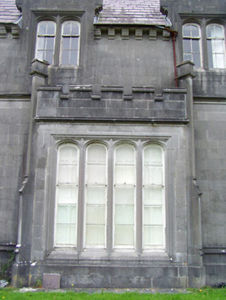 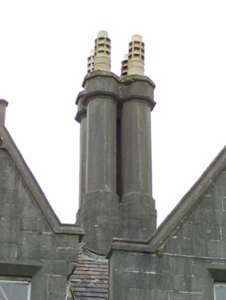 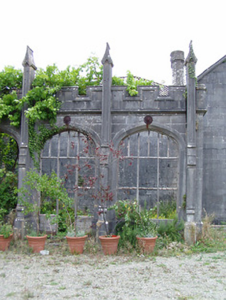 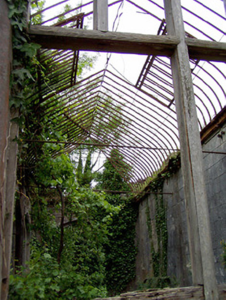 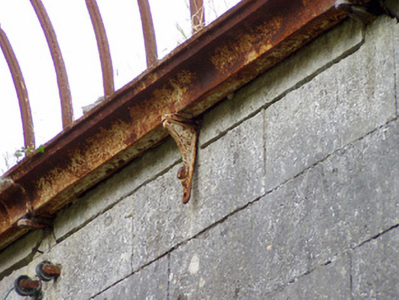 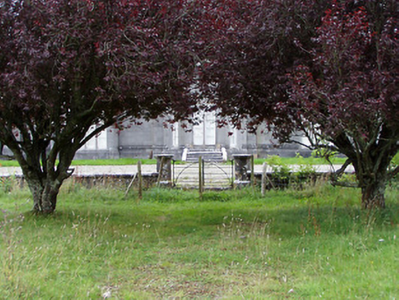 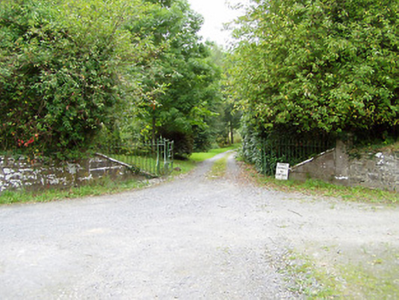 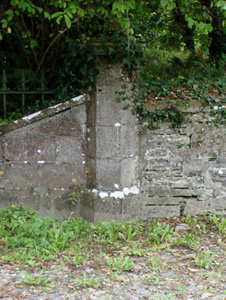 This rambling Tudor Revival or Elizabethan house, with its dramatic roofline of Tudoresque chimneystacks, turrets and gabled projections, is one of the finest houses of its type and date in the country. It is well-built using ashlar limestone masonry and is extensively detailed with carved and cut limestone of the highest quality (the main masonry contractor involved was William Dennin, while Andrew Coffey was responsible for the carved coats-of-arms and much of the detailing). The principal entrance front of the main elevation (northwest) is almost symmetrical, with its central gabled bay flanked to either side by three-stage towers on octagonal-plan, but the other elevations of the main block and to the ancillary wings are irregular, which creates an interesting plan with contrasting elevations and perspectives. Unusually for a country house of its size and date, the service wings are treated with the same architectural flair as the main house, and not hidden within a courtyard to the rear or in the basement as is more commonly encountered. The plan of the building is deceptively simple, the main block is essentially a plain rectangle, which through the addition of soaring towers and lofty Tudor style chimneystacks, acquires an almost theatrical façade. The Tudor Gothic theme culminates in the frivolous and playful conservatory/orangery to the rear. This conservatory, with its arcade of pointed arches, is reminiscent of the later French Gothic style with its towering gabled buttresses, tall wide window openings and thin walls. Carrigglas Manor is a fine example of the nineteenth century penchant for dramatic, sixteenth-century architecture given a romantic interpretation. Carrigglas Manor was built to designs by Daniel Robertson (died 1849), for Thomas Langlois Lefroy (1776 – 1869), Baron of the Court of Exchequer in 1841 and later the Lord Chief Justice of Ireland (from 1852). Reputedly, the character Mr. Darcy in Jane Austen’s Pride and Prejudice was based on the Thomas Lefroy (they met in England when Lefroy was attending college there). The architect of Carrigglas, Daniel Robertson, came to Ireland in 1829 after working on a number of Oxford colleges, buildings that are frequently built in the Tudor or Elizabethan style, which must have influenced Robertson’s Tudor-Revival designs of which he is a noted exponent. Robertson received many commissions following his arrival in Ireland, mainly for country house work (mostly in a Tudor style) in the south eastern counties, particularly in Counties Wexford and Carlow. Carrigglas is his only known commission in the north midlands. The present Carrigglas Manor is built on the site (or close to the site) of an earlier house (LF014-116----). The estate (and house?) was originally a manor of the Church of Ireland Bishops of Ardagh. The estate was left to Trinity College, Dublin, in the seventeenth-century and was later leased by Trinity, c. 1695 (deed), to the Newcomen family (later the Gleadowe-Newcomen family). It appears to have been bought by the Newcomen family in 1772. The owner/resident at the turn of the nineteenth-century, Sir William Gleadowe-Newcomen, commissioned James Gandon (1742 – 1823), the architect responsible for a number of structures at Carrigglas (including the stables (13401415), to design a neoclassical villa for him at Carrigglas. However, he later went bankrupt, following the collapse of the Newcomen Bank, before work could start on this house/villa. The Newcomen family had lived in Longford, (at Mosstown, Keenagh, amongst other places) , from the early-seventeenth century. Carrigglas Manor was leased to, and later bought, by the above Thomas Lefroy, c. 1833 (newspaper). This fine house forms the centrepiece of an extensive collection of related structures at Carrigglas, which represents one of the most important demesnes in north Leinster. The estate remained in the possession of the Lefroy family until c. 2005.