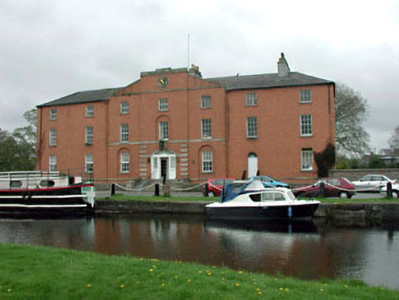 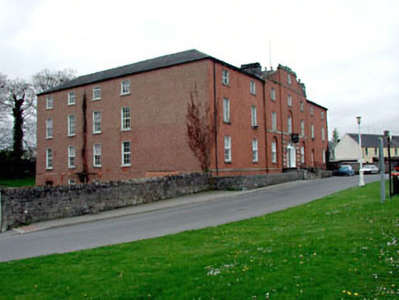 An hotel representing an important component of the built heritage of County Kildare with the architectural value of the composition, one recalling a contemporary hotel (1806) at Shannon Harbour in County Offaly (see 14922005), confirmed by such attributes as the rectilinear plan form centred on a Classically-detailed breakfront; the silver-grey granite dressings demonstrating good quality workmanship; the diminishing in scale of the widely spaced openings on each floor producing a graduated visual impression; and the pedimented roofline. Having been reasonably well maintained, the form and massing survive intact together with quantities of the original fabric, both to the exterior and to the interior, including crown or cylinder glazing panels in hornless sash frames: however, the piecemeal introduction of replacement fittings to the openings has not had a beneficial impact on the character or integrity of an hotel making an imposing visual statement overlooking the Grand Canal. NOTE: The commercial prospects of the hotel were initially encouraging but competition from the new railways, and falling revenues, saw the hotel close in 1849. The vacant hotel was subsequently adapted as a barracks to designs signed (1869) by Enoch Trevor Owen (c.1833-81), Assistant Architect to the Board of Works (appointed 1863). The hotel briefly returned to a version of its original use when it was repurposed (1942) by Bord na Móna as a hostel or "turf camp" for workers producing fuel to supply the Dublin market at the height of "The Emergency" (1939-46).