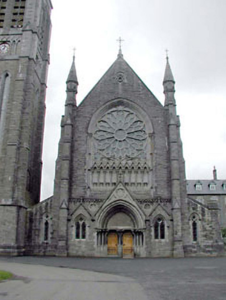 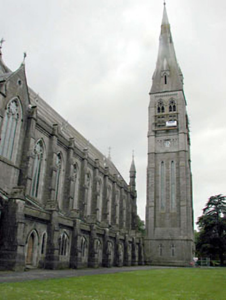 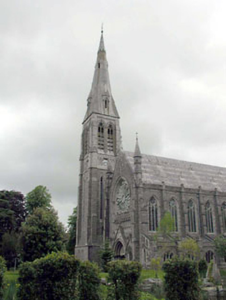 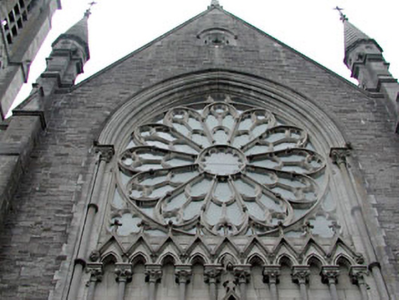 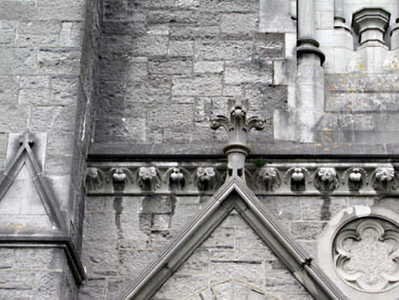 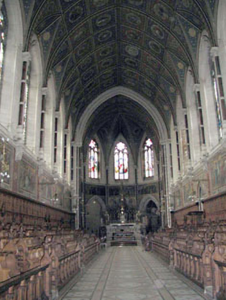 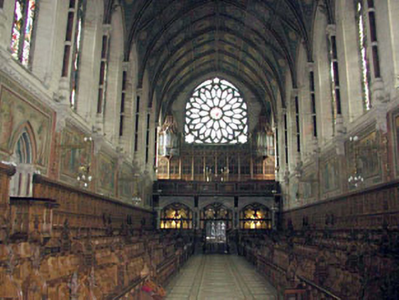 Saint Patrick’s Collegiate Chapel, designed by J.J. McCarthy, is a monumental exercise in the Gothic Revival style and is arguably the finest collegiate chapel in the country. Well-maintained, the chapel retains most of its original form and fabric and is an invaluable component of the architectural heritage of the college complex and Maynooth. Much ornamented, the chapel is an attractive contrast to the relative sobriety of the adjoining ranges of the library quadrangle (11803128/KD-05-03-128) and the Classical-style Georgian blocks to the remainder of the grounds. The construction in snecked limestone is a fine example of the high quality of stone masonry practised in the locality and this is especially evident in the carved stone detailing that has retained a crisp intricacy. The exterior retains many important original features and materials, including timber fittings to the door openings and slate roofs having iron dressings including finials and rainwater goods. The interior, which is similarly intact, comprises a full-height space of much artistic and technical achievement. The quality of carving to the timber pews and stone dressings (including an altar designed by G.C. Ashlin), the detailing of the mosaic-tiled panels, frescoes and stained glass windows, are all indicative of the high standard of craftsmanship employed in the construction and fitting out of the chapel. The part-exposed construction to the roof is also of some technical or engineering merit. The chapel is a prominent feature in the grounds of the college and dwarfs many of the adjoining ranges. The chapel is complemented by a fine almost-freestanding tower, designed by W. Hague, the soaring spire of which serves to identify the building in the landscape - it is a prominent landmark in the locality of Maynooth - while adding visual incident to the skyline.