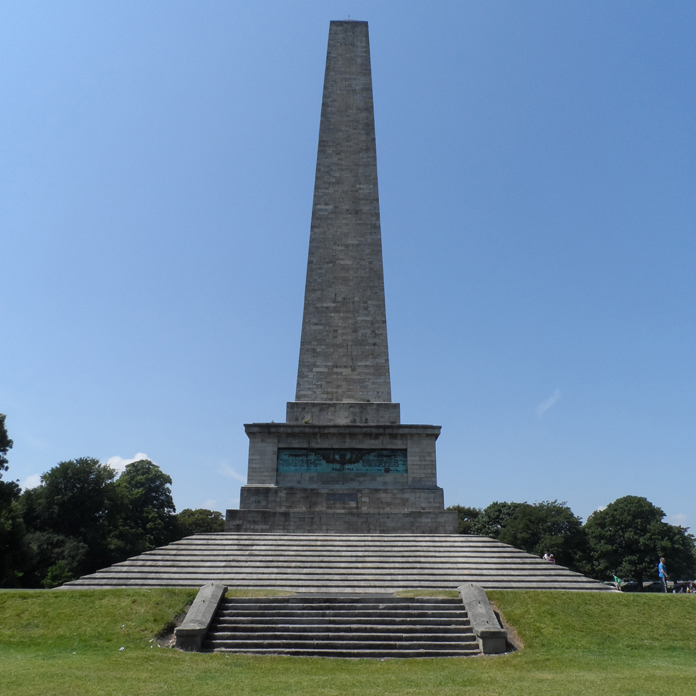 The Wellington Testimonial is dedicated to Arthur Wellesley (1769-1852), first Duke of Wellington, an Anglo-Irish soldier and statesman, and one of the leading military and political figures of the early nineteenth century (fig. 1). Wellesley, the fourth son of the first Earl of Mornington, was born at Mornington House, the family townhouse in Merrion Street, Dublin. He spent much of his childhood at Dangan Castle‌, the ancestral seat near Summerhill, County Meath, and attended school at Trim before enrolling at Eton. Wellesley began his military career in 1787 and was appointed a Colonel in 1796, serving in India and The Netherlands. As part of the campaign to extend the rule of the British East India Company, Wellesley served at the Siege of Seringapatam in 1799 and was appointed Governor of Seringapatam and Mysore later that same year. Wellesley rose to prominence as General at the Battle of Vittoria in June 1813, defeating the French army and eventually leading the allied powers of Britain, Portugal and Spain to victory in the Peninsular War (1807-14). Wellesley was awarded the title of first Duke of Wellington in 1814 following Napoleon’s abdication and went on to lead the victorious Anglo-Allied forces at the Battle of Waterloo on the 18th of June 1815. Napoleon was exiled to Saint Helena in 1815, where he died in 1821, and Wellesley was hailed as a national hero in Britain. The Battle of Waterloo is seen as a defining moment in European history as it enabled forty years of peace between Europe’s major powers. Wellesley subsequently held a number of illustrious positions, including the role of Prime Minister of the United Kingdom on two separate occasions, and it was during his tenure that the Roman Catholic Relief Act was passed in 1829.

Following Wellesley’s victory at the Battle of Vittoria a testimonial committee was founded in Dublin in July 1813 to initiate a public national monument in his honour in order that he might ‘enjoy the gratitude and applause of his contemporaries’ (fig. 2). Funds were raised by subscription and by early 1814 the total had reached £16,000. Another committee was founded to select the design and site of the proposed testimonial, which it was estimated would cost about £20,000. A competition was organised and models made of six short-listed designs were exhibited at the end of 1814 at the Dublin Society’s premises in Hawkins Street. The short-listed designs included: two obelisks by David Hamilton (1768-1843) and Sir Robert Smirke (1780-1867); three columns including a Doric column by James Wyatt (1746-1813) based on second-century Trajan’s Column, Rome, and two Corinthian columns by John Bowden (d. 1822) and William Wilkins (1778-1839); and a rotunda by Dr. Edward Hill (1741-1830). Other designs by Henry Aaron Baker (1753-1836), William Farrell (d. 1851), John Hargrave (c.1788-1833), George Papworth (1781-1855) and John Williamson (d. 1838?) were not short-listed.

Figure 3: A perspective sketch (1815) by Sir Robert Smirke (1780-1867) showing the obelisk and pedestal on a truncated pyramidal base of gently sloping steps. The sketch includes an equestrian statue of the Duke of Wellington on horseback flanked by recumbent lions, however, these were never realised and the vacant plinths were removed in 1857. Courtesy of Royal Institute of British Architects Library Drawings Collection (RIBA21514)

Smirke was awarded the commission in December 1815 for his winning design consisting of a massive obelisk on a square pedestal on a truncated pyramidal base of gently sloping steps, the whole measuring two hundred and twenty feet in height. The design also included an equestrian statue of Wellesley flanked by recumbent lions on its principal front with bas-relief panels on the other three fronts (fig. 3).

Smirke was an English architect and one of the leaders of the Greek Revival style. He became official architect to the Board of Works in 1813 and held this appointment until 1832, the year he received a knighthood. The recipient of the Royal Institute of British Architects’ Royal Gold Medal for Architecture in 1853, Smirke designed several major public buildings throughout his career including the façade and main block of the British Museum (1823-46), London. Shortly before his commission for the Wellington Testimonial Smirke designed a number of follies and ornamental buildings at Brightling Park, East Sussex, including the so-called “Brightling Needle”, a four-stage obelisk of coursed rubble stone.

Obelisks were a particularly popular form of public monument in the early nineteenth century and followed the surge of interest in ancient Egyptian archaeology in the late eighteenth century. Napoleon’s army carried out an impressive scheme of excavations during the Egyptian campaign of 1798-1801 and the rediscovery of the Rosetta Stone, and its subsequent capture by British forces in 1801, laid the foundations for the study of modern Egyptology.

It is not known if Wellesley was consulted on the design of the Wellington Testimonial, but he may have had a personal affection for the obelisk form owing to the time he spent at Dangan Castle. Bishop Pococke, in his Tour in Ireland (1752), wrote of Dangan Castle: Dangan the seat of Lord Mornington [is] situated on a most beautiful flat, with an Amphitheater [sic] of hills rising round it, one over another, in a most beautifull [sic] manner… [On] a round hill near the house is a Temple, and the hills round are adorned with obelisks: Pillars and some buildings, altogether the most beautiful thing I ever saw.

A number of locations were considered for the Wellington Testimonial including: ground between the Royal Barracks and the River Liffey; Merrion Square; Mountjoy Square; Phoenix Park; Rotunda Gardens; Saint James’ Market; and Saint Stephen’s Green. It was eventually decided to erect the obelisk near the Battery Salute area of Phoenix Park due to its altitude at seventy-four feet above sea level allowing visitors commanding views over the city (fig. 4).

The contract to construct the Wellington Testimonial was awarded to Cockburn and Williams in 1817 and the foundation stone was laid on the 18th of June 1817, the second anniversary of the Battle of Waterloo. The stepped base, the pedestal with its plinths for statuary, and the obelisk were completed by 1820. Most of the £20,000 capital having been spent on the masonry core and Wicklow granite ashlar facing, there was little or nothing left over for the statues or the bas-relief panels proposed for three fronts of the pedestal. In a cost-cutting exercise, the completed obelisk topped out at two hundred and four feet, some sixteen feet shorter than originally designed.

The testimonial fund was revived in 1829, the year the Roman Catholic Relief Act was passed during Wellesley’s term as Prime Minister, although no further work was immediately carried out. In a report of 1834, Decimus Burton (1800-81), architect of London’s Wellington Arch (1826-30), bemoaned the incomplete state of the Wellington Testimonial and suggested that the three empty plinths should be removed. Work resumed after Wellesley’s death in 1857 when the plinths were indeed removed. The bas-relief panels designed by Sir Thomas Farrell (1827-1900), John Hogan (1800-58) and Joseph Robinson Kirk RHA (1821-94) were unveiled in 1861 on the forty-fourth anniversary of the laying of the foundation stone. The panels measure thirty-five feet in width by seven feet in height and were intended to be cast from melted-down cannon captured at Waterloo; instead they were cast from gun metal captured during the Napoleonic Wars and held at the armoury in Woolwich (figs. 5-9).

Figure 5: The principal front carries a bronze plaque with an inscription in Latin and English either side of a funerary wreath reading: ASIA AND EUROPE SAVED BY THEE PROCLAIM/INVINCIBLE IN WAR THY DEATHLESS NAME/NOW ROUND THY BROW THE CIVIC OAK WE TWINE/THAT EVERY EARTHLY GLORY MAY BE THINE

Figure 6: A view of the dedication which, covered in graffiti and weathered over time, can still be read as: THIS TESTIMONIAL TO THE SERVICES OF /ARTHUR DUKE OF WELLINGTON/WAS ERECTED BY THE PRIVATE SUBSCRIPTION OF HIS COUNTRY MEN/THE INSCRIPTIONS WERE WRITTEN IN HONOUR OF HIS BROTHER BY RICHARD MARQUIS WELLESLEY/THE SCULPTURES WERE EXECUTED BY IRISH ARTISTS AND CAST FROM CANNON TAKEN IN BATTLE/BEGUN IN 1817 EARL WHITWORTH PR FINISHED IN 1861 EARL OF CARLISLE PR/R. SMIRKE RA ARCHITECT

Figure 7: A view of the bas-relief panel designed by Joseph Robinson Kirk RHA (1821-94) depicting the Siege of Seringapatam (1799) where Wellesley served as Colonel. Kirk’s signature appears on the cannon on the left and again, in capitals, on the bottom right of the panel where it was originally hidden behind a bronze border stolen in the 1950s

Figure 8: The ­bas-relief panel designed by John Hogan (1800-58), and completed by his son John Valentine Hogan (1840-1920) under the direction of Giovanni Maria Benzoni (1809-73), is an allegorical depiction of Wellesley accepting the civic crown from Britannia and presenting a scroll of freedom to Hibernia, the whole symbolising his key role as Prime Minister during the passing of the Roman Catholic Relief Act in 1829

Figure 9: A view of the bas-relief panel designed by Sir Thomas Farrell (1827-1900) depicting cavalry and foot soldiers at the Battle of Waterloo (1815). Farrell’s signature appears on the drum skin near the centre. The wounded figure on the extreme left is believed to be Field Marshal Henry Paget (1768-1854), Earl of Uxbridge, whose injured leg was amputated during the battle and became a macabre tourist attraction in Waterloo

Dominating the south-eastern corner of Phoenix Park, the Wellington Testimonial is an ambitious and imposing public monument and is believed to be the tallest obelisk in Europe. The obelisk commands views from the surrounding areas of Islandbridge and North Circular Road and, appropriately, from the Royal Hospital, Kilmainham, where military personnel recuperated after the wars. The Wellington Testimonial provides an eye-catching landmark on the western approach into Dublin as well as terminating the vista along the River Liffey from the city centre (fig. 10).

Eilíse McGuane is an architectural historian specialising in the documentation of the historic environment. She has previously taken part in a number of National Inventory of Architectural Heritage surveys of Dublin and County Monaghan and is currently employed as an Assistant Designation Advisor with Historic England, assessing buildings, archaeological landscapes and parks and gardens for designation