Building of the Month - September 2015 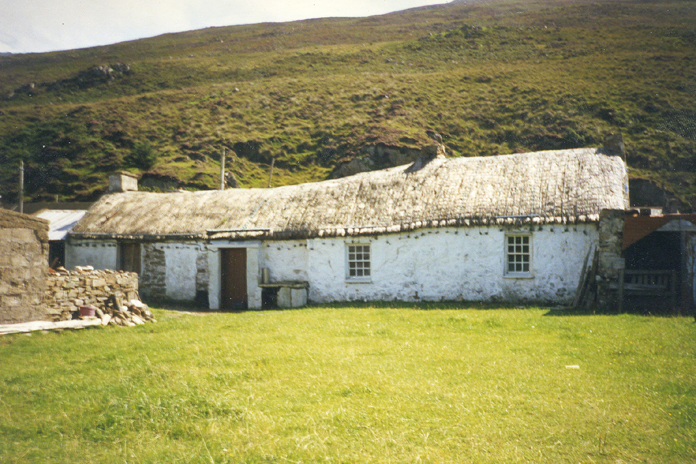 The NIAH received a letter and some family photographs of a thatched house in County Donegal in early 2015. These capture a sense of place and its personal significance. The photographs beautifully illustrate the changes experienced by one family over the twentieth century. With the author’s approval, the letter has been edited for this Building of the Month. It also highlights some of the issues at the heart of the conservation of our vernacular built heritage.

Figure 1: A photograph from August 1997 of the thatched house at Leenan Kiel, County Donegal, which has been home to the Kearney family for generations

I am writing this in the hope that you will understand the reasons behind my heartfelt quest to try and restore my family home. I am driven by the love of this old building. It is tied up with my identity and I feel a responsibility to make the effort.

Figure 3: A photograph from the 1950s showing the village of Leenan Kiel, including the Kearney family home, in the shadow of the Urris Hills. Leenan Kiel later featured on the cover of E. Estyn Evans’ The Personality of Ireland (1981)

It is an eighteenth-century century thatched house, the last of the thatched houses in the village of Leenan Kiel. It was a small farm where my mum Frances and her siblings – Maryann, John, Michael and Philip – were raised. Three brothers – Bernard, Michael and Edward Joseph – sadly died as children, in 1925, of diphtheria. My mum emigrated to England, but we came back regularly in the 50s, 60s and 70s because of our grandparents. We have experienced the changes and also the static life which was so beautiful, the home place that never changed.

Figure 4: A photograph of the Kearney family taken in 1930

I continued to come back with my children, keeping my attachment to what I call home, from the 80s to the present day. My uncle Michael left the home to me. I feel that I am part of its walls, as the memories are part of me – the loves and life’s tragedies that have happened here are part of my being. Uncle Michael knew how I felt. He knew I would never wipe away the stones of this home and that I would try to conserve and protect it for future generations.

Figure 5: A photograph of Michael Kearney taken in 2000 as he inspected the thatched roof for possible repairs

As Michael became older he was unable to maintain the thatching and gradually, although he still lived in it, it fell into decline. He had a demountable house placed right in front of the house to move into. He would not leave his home place: even going to Clonmany village, as suggested, would have been like emigrating to him.

The house never had running water or toilet facilities, although these were installed for the demountable house. So we were still using a dry toilet and getting water from the hill, which is amazing given the modern times we were living in. Michael cooked on an open fire with a crook and all the traditional implements. It was a source of great curiosity for visitors who were fascinated by him and his wise and quiet disposition. He was a great orator and historian about the local area.

Figure 6: Frances Page visited her family home as recently as June 2014. Although she is now ninety, she does not think twice about doing a job that needs doing: here she is shown pulling weeds off the roof

I am blessed to still have my mum Frances with me. She is ninety now and still, thank God, sharp in wit and mind. She was in Leenan Kiel in June 2014. As you can see from one of the photographs, despite her age, she does not think twice about doing a job that needs doing – in this case pulling weeds off the roof. She has a vast history to tell about our home and area.

Figure 7: Frances has a vast history to tell about the Kearney family home and Leenan Kiel

My quest is to try and restore the home and bring it back to life. I would love my mum to see this start soon. I am still working, but I hope to dedicate as much time as I can to try and achieve this. There are stone byres, a barn and an old stone chicken house which have lost their roofs, but the walls are still standing. There is so much that in time could be restored to enhance the beauty of this village. The drystone field boundaries are intact, defining elements of our cultural landscape.

The landscape is beautiful and Leenan beach is one of the most unspoilt in the area. The newly developed hill walk, which commences outside our house, provides a stunning panoramic view over Leenan Bay, Urris, Dunaff Hill and over Lough Swilly to Fanad.

In an article by Donegal County Council, I read, “The cultural landscape is like a palimpsest with each generation leaving its imprint on it”. This for me sums up my journey towards a goal that will hopefully leave an enriching imprint for the next generation.

Irene McDermott is a nurse working in England. She can be contacted via the NIAH