Building of the Month - February 2015 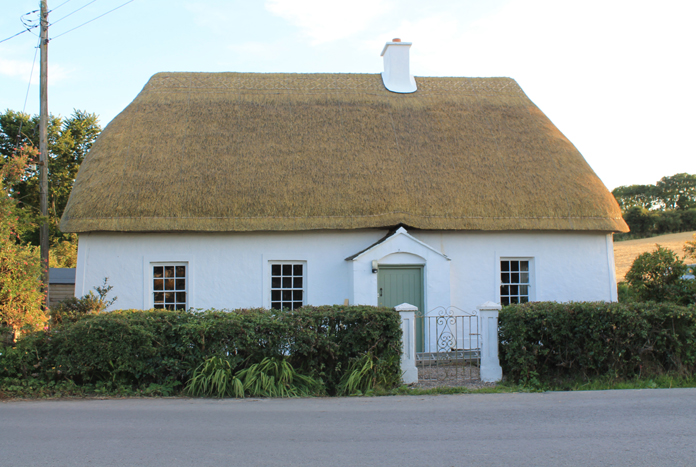 Thatched houses in Ireland fall into two broad categories. Direct entry houses, where the door opens directly into the main living space, abound in the west and north and typically feature rubble stone walls and high pitched thatched roofs secured on stone or timber pegs. Lobby entry houses, where the door opens into a small lobby giving way on either side to the main living space and a bedroom, predominate in the east and south. Once again built using “found” materials, the houses frequently show walls of compacted mud or “daub” on rubble stone foundations, and gently hipped roofs of locally sourced cereal thatch.

Ours is the only surviving thatched house in the village of Kilmuckridge, County Wexford, and is located in a prominent position directly opposite the Catholic church. It is not known when exactly the house was constructed, but it is clearly indicated on the Ordnance Survey map published in 1841 along with three other houses which formed a cluster around the church and national school. There are now no visible remains of the other houses or the school. The first known inhabitants of our house were Patrick and Mary Redmond – the great, great, great grandparents of our children – who took up residence in the 1860s and were both teachers in the national school. On their retirement, their daughter Margaret Redmond took over as teacher and remained living in the cottage until she died in 1974.

Having been uninhabited for a number of years, the house had fallen into a state of disrepair and the heavy snow of winter 2010-2011 put serious stress on an already failing roof. We inherited the house in 2011 and began a programme of work to secure the long-term integrity of the building. This also afforded us an opportunity to glimpse into its history.

While the house shows a lobby entry plan form today, research carried out in association with the restoration revealed that it began as a direct entry house. A gabled windbreak in the north elevation opens into a small lobby where the main room lies off to the east. Here an open hearth, and possibly a “spy hole” looking out into the lobby, has been obscured behind a cast-iron Carron Company stove and a rendered brick surround probably introduced in the 1860s. A large beam that supported the chimney canopy is still visible. Stairs providing access to the bedrooms in the attic space are located adjacent to a door opening in the south elevation.

The walls of the house are primarily constructed of mud on rubble stone foundations and show a battered profile. As is typical of such buildings, they had been covered in a hard cement render sometime in the mid twentieth century. This had cracked on parts of the east and south walls leaving the mud exposed. It was decided to fully strip the walls back and carry out the necessary repair work. This was done by Brian Tobin of Bunclody who specialises in mud wall and lime repairs. Brian removed the cement render, cleaned the rubble stone foundations and then reinstated the vertical faces of the mud wall using a mixture of local marl and oat straw. All the while, the moisture levels were monitored and the walls shaded in hessian and kept damp to allow the mud to dry slowly. The restored walls were then lime rendered and limewashed.

The removal of the collapsing ceiling boards allowed for the detailed examination of the roof supports. Collared boughs formed the roof of the earliest part of the house with the thatch roped to horizontal runners of split roundwoods, driftwood and other re-used timbers, pegged behind each bough to give the illusion of single continuous elements. On the northern slope a ribbery of diagonal hazel rods overlay the horizontal runners. The extension to the west was clearly evident and sawn red deal was used to construct that section of the roof; red deal was also introduced for repairs to the earlier roof. Some of the timbers were completely infested with woodworm and were beyond repair. A small number had to be removed and those retained were treated with a biocide. The entire roof was strengthened with new timbers by Claire’s father and uncle, John Breen and Lou Breen.

Matt Whelan, with a number of assistants from south Wexford, carried out the rethatching of the roof during the summer of 2014. Matt sourced wheat straw, grown with very low levels of nitrate and baled with a specially designed baler that doesn’t break the straw and maintains the necessary length. While we would have preferred to have used locally sourced straw, Matt was unhappy with the quality of what was available and, on his advice, the straw came from a farm in Essex, England, ironically owned by two brothers from Ireland. The existing thatch was stripped back to what was deemed a sound base and this varied greatly over the entirety of the roof. The new straw was pulled into bundles and then “thrusted” into place. The eaves were trimmed and the roof was finished with a plain ridge secured with hazel stretchers and scallops. Finally, an application of bluestone was applied to the new thatch to help to preserve it.

In tandem with the restoration of the house, a new two-storey extension was constructed to the rear of the property, connected by a single-storey link. While a two-storey extension might not seem ideal, we were limited by the constraints of the site and were careful to ensure that it does not have a visual impact when viewing the house from the road.

The house is now part of a comfortable home and we feel that we have achieved our original aim. This was to strike a balance between preserving an historical house and replacing an extension which allowed for the introduction of lots of light and modern conveniences such as central heating and solar panels. This will hopefully secure its future into the next generation and many more generations to come.

The restoration of our house was assisted by grants from the Heritage Council and Wexford County Council through the Built Heritage Jobs Leverage Scheme 2014.

To find out more about the restoration of our house, you can read our blog on: https://wexfordthatchedcottage.wordpress.com

Claire Breen is an archaeologist in the Department of Arts, Heritage and the Gaeltacht. John O’Neill has a PhD in archaeology and is currently Head of Lifelong Learning in the Institute of Technology Tallaght