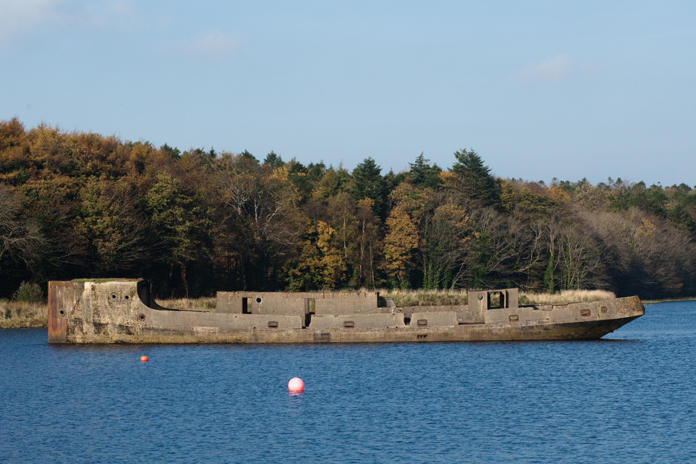 The River Moy, as it winds its way through Ballina, County Mayo, has long been famed for its salmon fishing. Its wooded banks make a tranquil setting for the pleasure craft that make their way downriver from Killala Bay during the season. While tourists come and go with the tides, the River Moy is the permanent home of a vessel that has continued to beguile the observer ever since it first appeared in the landscape in the 1930s.

The SS Creteboom owes its origins to a steel shortage brought about by the First World War (1914-8). In 1917, as the conflict dragged on into its third year, accelerated industrialisation in Great Britain, particularly in the field of munitions-building for the “arms race” against Germany, put a massive strain on the supplies of iron and steel. A new fleet of barges and tugboats was required in order to obtain iron-ore from northern Spain. However, to build that fleet with steel was counterproductive and so, continuing an experiment that saw the first ferro-cement vessel exhibited by Joseph-Louis Lambot (1814-87) at the Paris Exposition Universelle in 1855, the “concrete ship” was born. Not only was it hoped that the new fleet would be cheap and quick to complete, it was predicted that the concrete hulls would be impenetrable to the mines and torpedoes that were a constant threat to the shipping lanes between Great Britain and mainland Europe. Working to an order for 154 vessels, including 24 tugboats, from the Ministry of Shipping, construction on the new fleet began in a number of adapted and purpose-built shipyards across the country.

Guy Anson Maunsell (1884-1961), a civil engineering graduate from the City and Guilds of London Institute, had seen active service on the Western Front when conscripted as a commissioned officer in the Royal Engineers in 1917. Recalled to England in 1918, Maunsell took up the position of chief engineer at John ver Mehr’s shipyard on the River Adur at Shoreham-by-Sea, West Sussex, and was responsible for the design of the shipyard and the tugboats it produced.

The process for completing the tugboats involved a skeleton of precast concrete with steel bar reinforcements – the demand for steel bars was not as great as that for steel plates and allowed for their use in reinforced concrete. An exterior formwork of shaped timber coupled with an interior formwork created the void necessary for the poured concrete obtained from the Shoreham Cement Works. Once set, and the formwork removed, the hull was sealed with a layer of cement, a layer of bitumen “pitch” and a painted finish. Only the rudder post and skylights required steel while the bridge and deck were built of timber.

Unfortunately, the brief for a cheap and quick production could not be met. Not only did each tugboat cost on average £27,000 when a steel version cost £17,000 but only one vessel had been completed at the time of the Armistice in November 1918: the SS Creteacre in a shipyard in Poole. The emergency lifted, the original order for 154 vessels was cancelled and only those barges and tugboats in an advanced state of construction were completed. By the time the Shoreham shipyard launched SS Cretewheel in the summer of 1920 the finished fleet amounted to sixty-six vessels including 12 tugboats. Ironically, SS Cretewheel was the first of the vessels to be lost when it was wrecked on rocks at Newbiggin-by-the-Sea, Northumberland, on the 14th October 1920.

In 1922 a flotilla of ten tugboats and thirty-nine barges was purchased by Stelp and Leighton of London for the new Crete Shipping Company to transport coal to the continent. The venture was short lived and shipping ceased in 1924. SS Creteboom spent the remainder of the 1920s and the early 1930s moored on the River Wear until it was sold to the South Stockton Shipbreaking Company of Thornaby-on-Tees in 1935. The vessel was stripped of its recyclable materials so that only the reinforced concrete hull survived.

SS Creteboom made its way to the River Moy in 1937 when it was purchased by the Ballina Harbour Commissioners for the purpose of sinking it, and other obsolete vessels, to form a barrier across the river. Only when it was brought to the quayside for assessment was it discovered that the hull was damaged, was taking on water, and was at risk of sinking immediately, threatening future access to the quay. The hull was ultimately towed to the centre of the river where it remained until 1974 when it was towed to its present position, in the shadow of Belleek Woods, to prevent the build-up of sand and damage to the salmon fisheries.

Glimpses of the SS Creteboom can be seen by visitors to Belleek Manor, on the northern outskirts of Ballina, where a photographic exhibition, “The Buildings of County Mayo”, will be held from the 13th of July to the 11th August 2017. The exhibition, presented by Mayo County Council in partnership with the National Inventory of Architectural Heritage, will be housed in the recently restored courtyard buildings and admission is free.