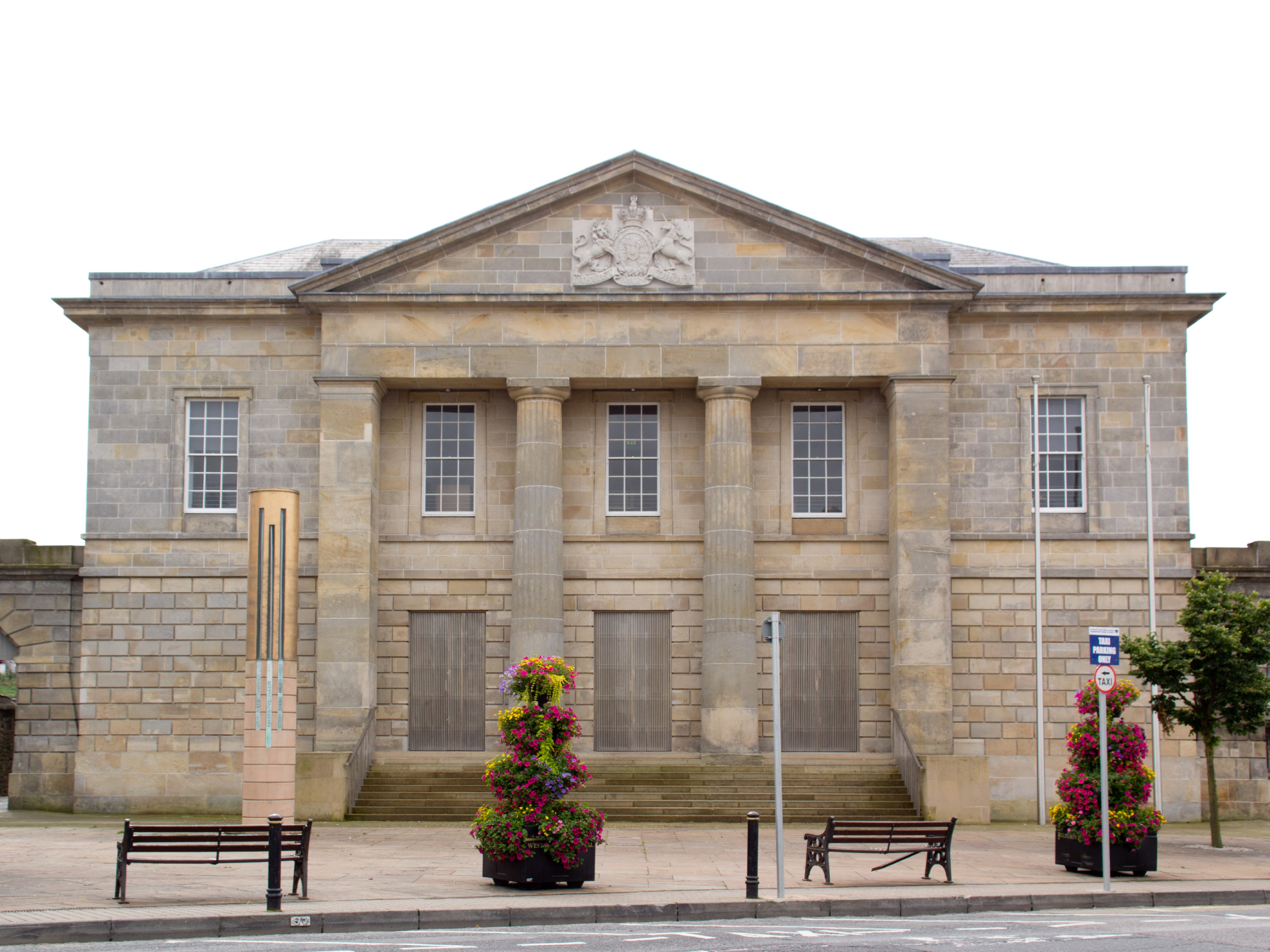 Monaghan Courthouse occupies a prominent position in the centre of Monaghan and dominates the south side of Church Square, previously New Diamond, so-called after the neighbouring Saint Patrick’s Church (1831-6) with which the courthouse forms an imposing pairing.  The present courthouse is the second “sessions house” to have been built in the town and replaced an eighteenth-century building in The Diamond, previously Old Diamond: both the old and the new courthouses are marked on the first edition of the Ordnance Survey published in 1836. 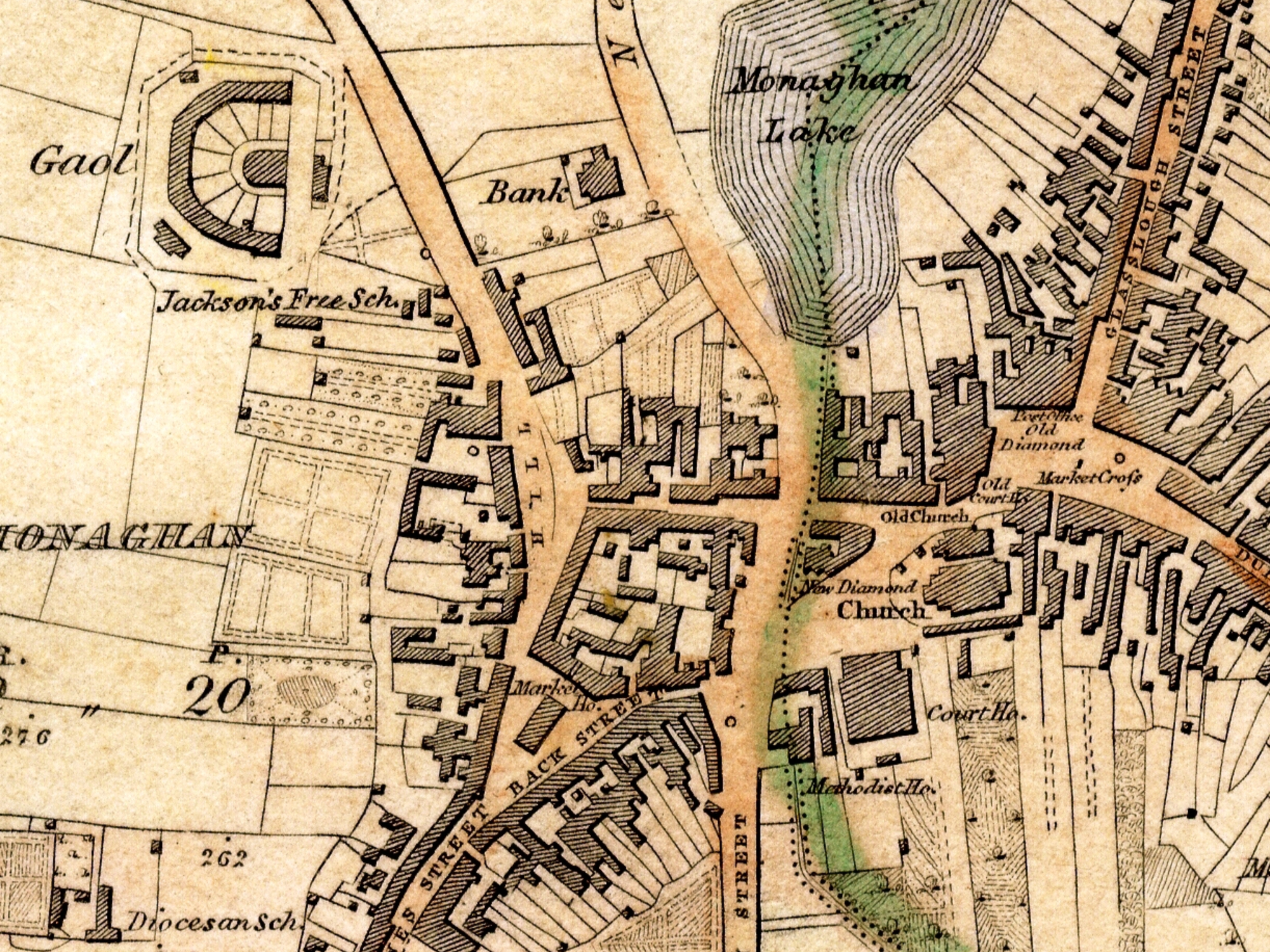 An outline plan of the old courthouse survives, signed and dated (27th April 1831) by Alexander Fleming, Surveyor to Lord Rossmore’s estates, and, in addition to the Crown Court, Civil Court and jury rooms, the ground floor housed a Coffee Room.  The earliest coffee houses opened in Dublin in the late 1600s and the fashion soon spread to county and provincial towns throughout Ireland.  They enjoyed their heyday in the eighteenth and nineteenth centuries, acting as informal meeting places where gossip, information and political intrigue were exchanged through conversation and print. 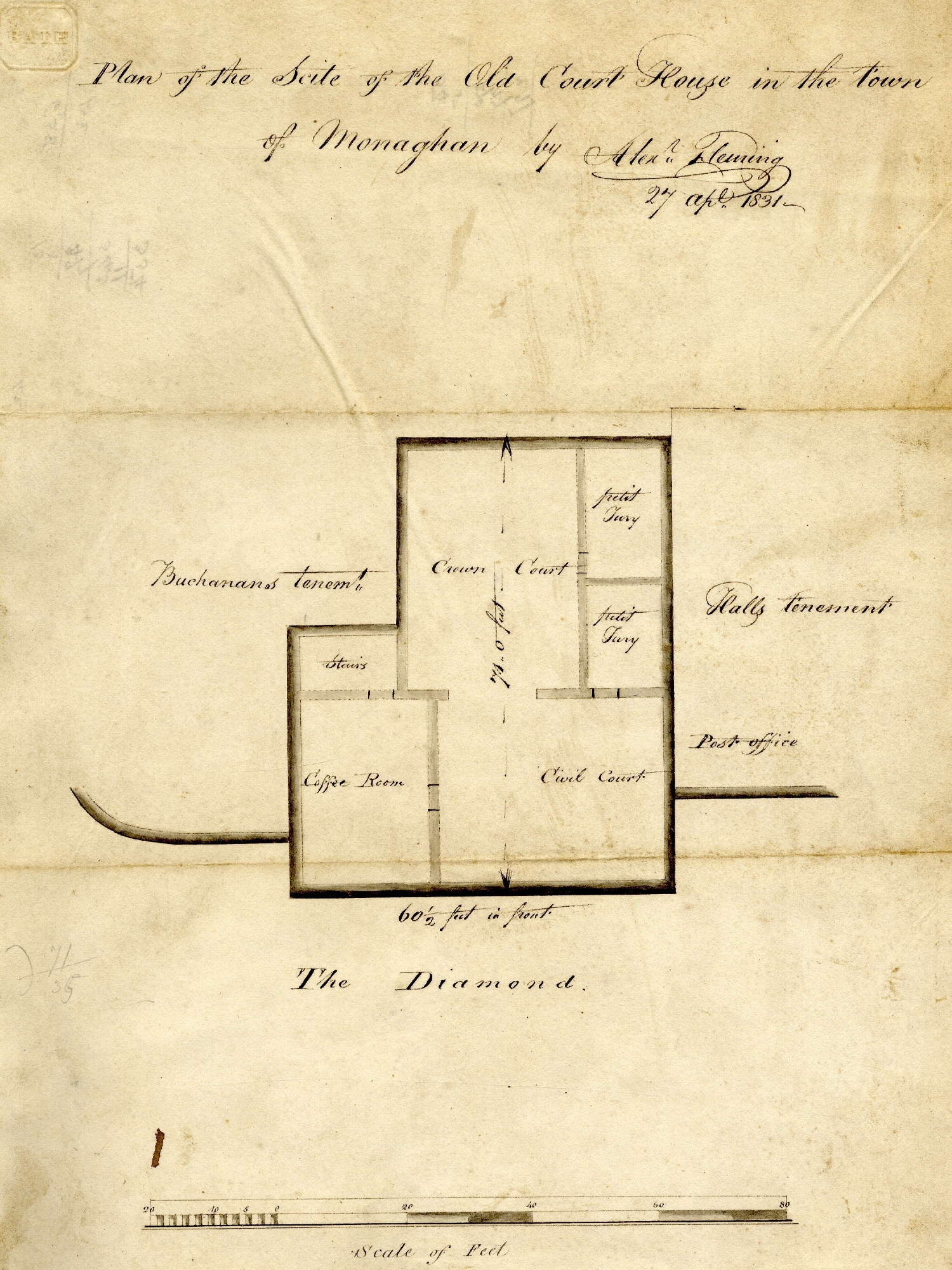 The old courthouse deemed no longer fit for purpose, a new courthouse was planned for the site of the old county gaol.  A new gaol was constructed (1814-24) in High Street and, adapted as a county infirmary in the later nineteenth century, was demolished and replaced (1932-38) by the present Monaghan County Hospital. 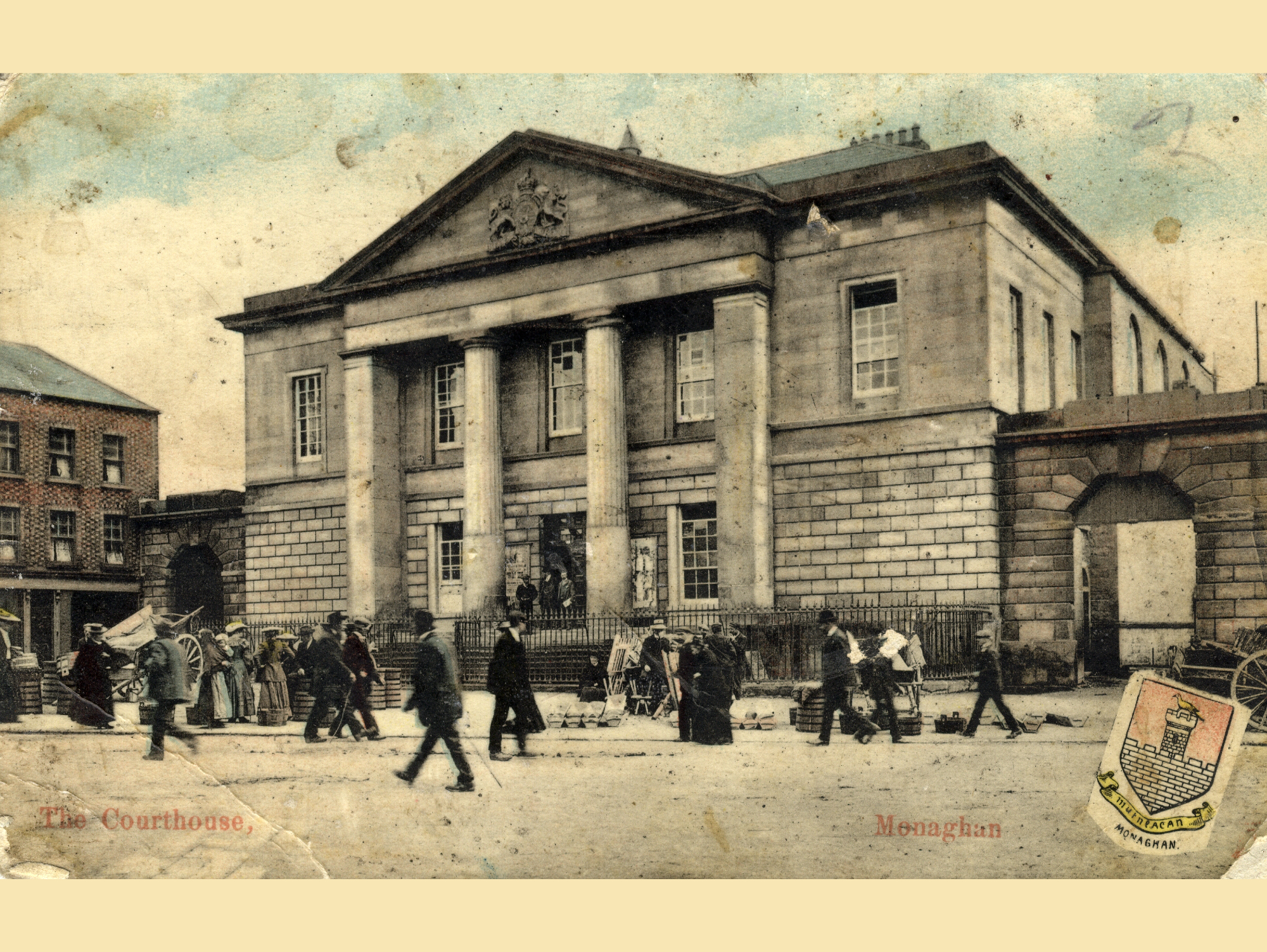 A colour-tinted postcard, postmarked the 3rd of February 1907, shows the courthouse erected (1827-30) to designs by Joseph Welland (1798-1860) of Dublin who, largely known for his ecclesiastical commissions, inherited a secular practice from his mentor John Bowden (d. 1822) of Dublin.  The courthouse is a fine example of the neo-Classical style.  Kevin V. Mulligan, in An Introduction to the Architectural Heritage of County Monaghan (2013), remarks that the giant fluted Doric order, the pediment, and the channelled rustication at street level, lend the courthouse a fitting gravitas.  An earlier proposal (1826) by William Deane Butler (1793/4-1857) of Dublin was apparently rejected as it lacked this very quality. 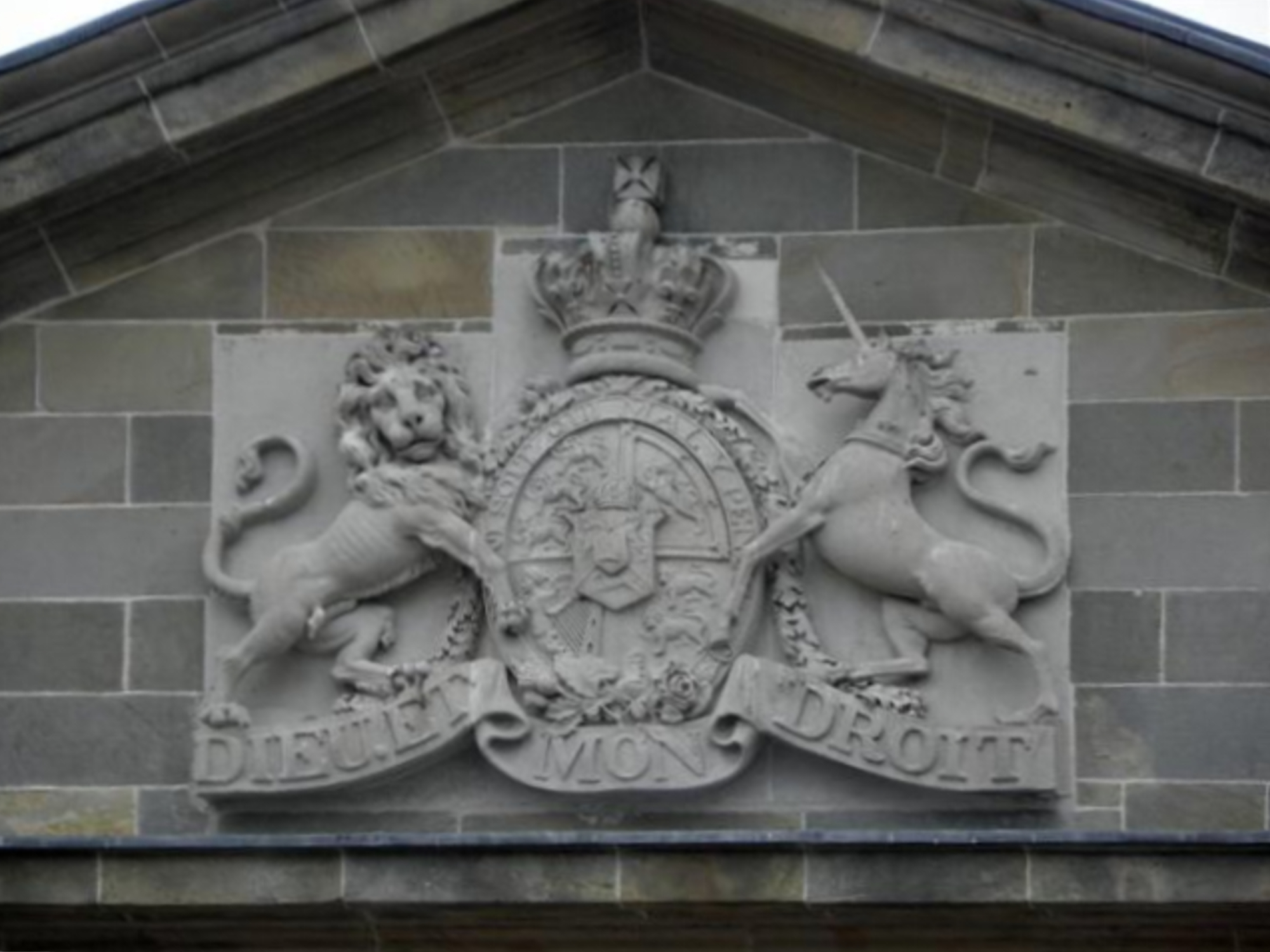 The courthouse was constructed using large blocks of creamy-coloured Carnmore sandstone quarried at Eshnaglogh, 15km to the north-west of Monaghan.  That quarry has long since closed but stone from the same formation is still quarried at Bragan, a few kilometres north-east of Eshnaglogh.  Completed at a cost of £10,000, the new courthouse was described by Samuel Lewis (1837) in effusive terms as ‘a handsome modern building of hewn stone, containing spacious court-rooms and all requisite offices, and in every respect well adapted to its purpose’.  The centrepiece of the courthouse, a lofty portico addressed by a broad flight of steps, carries in its tympanum the Royal coat-of-arms of the United Kingdom with the Lion and the Unicorn flanking a shield with three lions passant in the first and fourth quarters symbolising England, a rampant lion in the second quarter symbolising Scotland and a harp in the third quarter symbolising Ireland.  The crown-topped inescutcheon, or smaller shield, was removed from the coat-of-arms when Queen Victoria succeeded the throne in 1837 and dates the courthouse to the reign of King George IV.  The coat-of-arms survives today as a reminder that the nineteenth-century court system was an agent of the Crown. 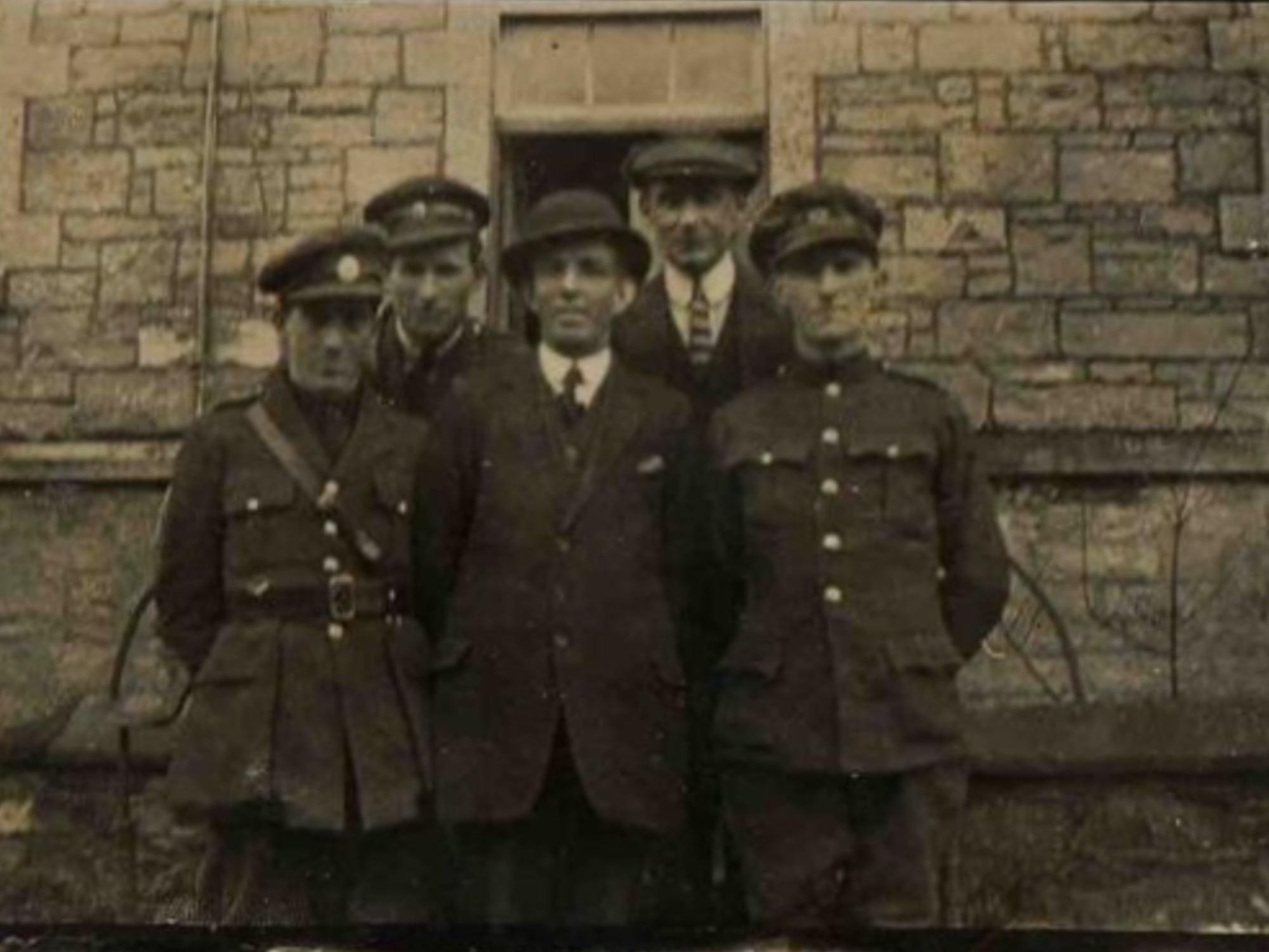 The twentieth century brought mixed fortunes to Monaghan Courthouse.  A company of the National Army stationed at the courthouse during the Civil War (1921-3) came under attack and bullet marks can still be seen on the pillars.  On the left of a group pictured outside the courthouse is Captain Thomas “Tommy” Donnelly of Glasslough Street whose account of his arrest at the courthouse, and subsequent imprisonment in Belfast, is available from the Bureau of Military History.

The courthouse originally featured a somewhat standard plan with double-height courtrooms opening off a central hall.  A suite of solicitors’ rooms was subsequently adapted in 1928 as the first library in the town.  Monaghan County Council also based their offices in the building while Monaghan County Museum opened in 1974. 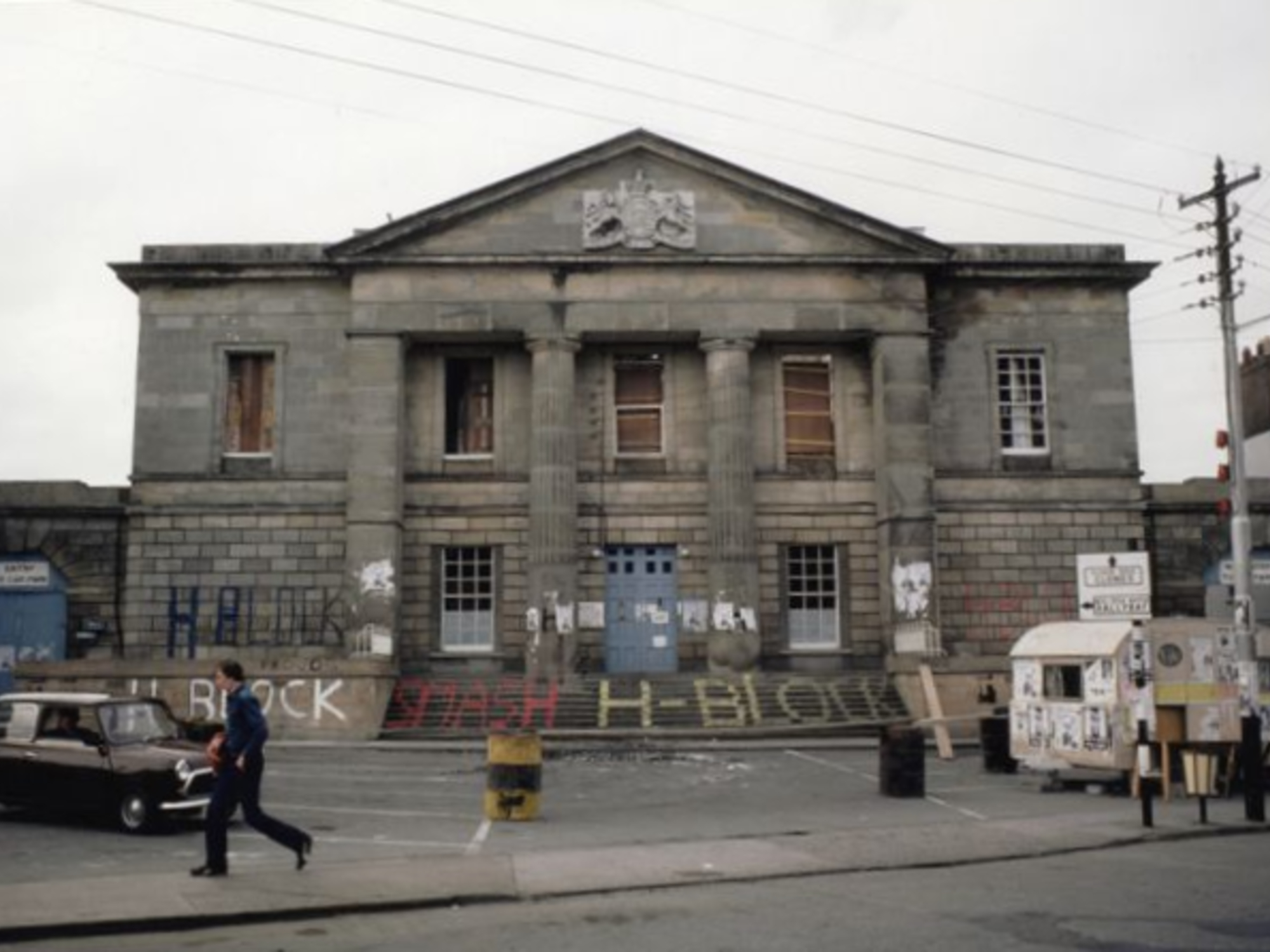 The original layout of the courthouse survived largely intact until May 1981 when a devastating fire reduced the building to a burnt-out shell.  Monaghan County Council relocated to Glen Road while Monaghan County Museum moved to new premises in 1-2 Hill Street.  The boarded-up ruins subsequently served as a backdrop to demonstrations during the time of the hunger strikes at Maze Prison.  The courthouse lay empty until 1986 when a programme of reconstruction was completed.

Following the enactment of the Courts Service Act, 1998, the care and maintenance of courthouses devolved to the newly formed Courts Service.  This work had previously been the responsibility of the relevant local authority.  This change was the most significant to the courts system since it was first established in 1924 and was necessary for many reasons, not least the manner in which the business of the courts and the care of prisoners, staff and witnesses had changed since most of the courthouses had been built.

Monaghan Courthouse was completely refurbished in 2011 by the Architectural Services of the Office of Public Works.  Carnmore sandstone was sourced from Rossmore Quarry, County Fermanagh, for repairs to the façade and the stone work was cleaned to bring out its inherent golden glow.  The interior, reconfigured to accommodate two jury courtrooms and a family law court, centres on a remodelled foyer lined with Carlow limestone and a top-lit atrium with Irish oak staircase; the courtrooms feature wall panelling of Irish oak.  The refurbished courthouse was recognised with an Irish Architecture Award under the category of Best Conservation/Restoration Project 2012.

The Monaghan Memorial, a sandstone and metal pillar, was erected in front of the courthouse in memory of the seven people killed in the Monaghan bombing on the 17th of May 1974.  The memorial, designed by Ciaran O’Cearnaigh, features seven shafts of light above embossed bronze plates bearing the names of each of the victims: Patrick Askin; Thomas Campbell; Thomas Croarkin; Archie Harper; Jack Travers; Peggy White; and George Williamson.  The memorial was unveiled by President Mary McAleese on the 17th of May 2004, the thirtieth anniversary of the bombing.

Monaghan Courthouse and the Monaghan Memorial are highlights of the Monaghan Town Trail.  Other highlights include the adjacent Saint Patrick’s Church; the market house (1792) designed by Colonel Samuel Hayes (c.1743-95); the Rossmore Monument (1876), a neo-Gothic memorial commemorating Henry Robert Westenra (d. 1874), fourth Baron Rossmore; and Monaghan County Museum where visitors can explore the history of the county in the permanent exhibition galleries.  Click here to download the Monaghan Town Trail.

Theresa Loftus has worked in Monaghan County Museum since 2004.  Initially she worked in registration, moved to education and outreach and became Exhibition/Research Officer in 2007.  In that time she has studied Local History in NUI Maynooth and Museum Practice and Management in the University of Ulster

Dunne, Mildred and Philips, Brian, The Courthouses of Ireland (Kilkenny: The Heritage Council, 1999)

Mulligan, Kevin V., An Introduction to the Architectural Heritage of County Monaghan (Dublin: Department of Arts, Heritage and the Gaeltacht, 2013)