Building of the Month - September 2019 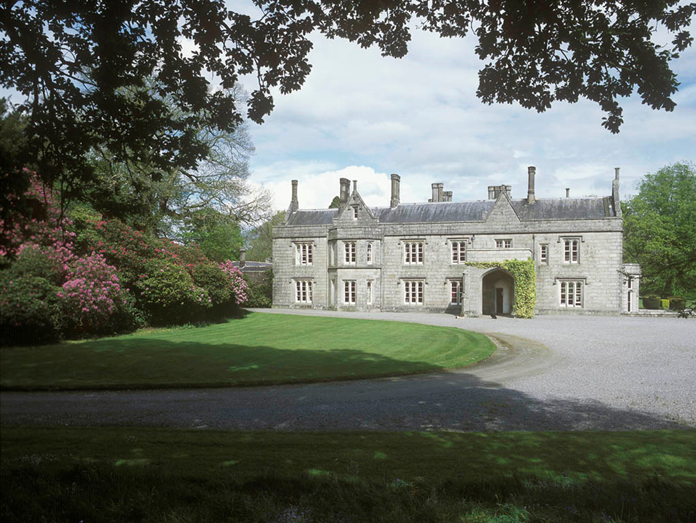 Lisnavagh House, County Carlow, which was one of the largest houses in Ireland before its owners, the Bunburys, orchestrated a major reduction in the 1950s. Photograph by James Fennell

Located just south of the village of Rathvilly, County Carlow, Lisnavagh House (1847-9) was one of the largest houses in Ireland before its owners orchestrated a major reduction in the 1950s. The first stone of the rambling Gothic Revival mansion had been laid just over a century earlier.

In 1846, Captain William McClintock Bunbury (1800-66), a 46-year-old naval officer, succeeded to Lisnavagh on the death his maternal uncle Thomas Bunbury (1774-1846). That same year, he was elected to fill his late uncle’s Westminster seat as the Member of Parliament for Carlow.

Lisnavagh has been in the Bunbury family since the seventeenth century, where the earliest recorded house was completed in 1696. William Bunbury (1744-78), the Captain’s grandfather, had commissioned the architect Oliver Grace to build a new house but the project collapsed with William’s untimely death resulting from a fall from a horse.

It was William’s son Colonel Kane Bunbury (1777-1874) who paid the bulk of the estimated £16,000 to build the new house at Lisnavagh between 1846 and 1849; the money is thought to have come through Kane’s maternal grandfather, Redmond Kane (d. 1778), a successful attorney and property speculator.

A collection of 150 drawings by Daniel Robertson (d. 1849) illustrates the design process for Lisnavagh House. Number 128 is titled Sketch Elevation of the South or Terrace Front of Lisnavagh House Captn. W:B McClintock Bunbury

Copies of Daniel Robertson’s collection of 150 drawings are now held by the Irish Architectural Archive. He maintained a frequent, almost daily, correspondence with the Captain throughout the project, advising him on progress and asking his advice and direction on related matters. He also designed new formal gardens for the demesne, although a fountain and a conservatory commissioned (1853) from Richard Turner (c.1798-1881) was never realised.

A rare photograph (1912) by Victor Robert Pochin (1879-1972) of the front of Lisnavagh House before the reduction of the 1950s when everything south of the porte cochère, beginning with the gabled projection, was demolished. The gravel drive, sweeping around a half-moon lawn, still survives

Shortly after the completion of the main house, a reporter noted:

Few edifices present so noble an appearance… The elegant mansion on the north side presents the appearance of an extensive quadrangle, every view that presents itself on the approach from that side being chaste and classical, combined with elaborate taste and skill – harmony and proportion (combined with comfort and convenience) being evidently the object of the architect.

The south side, comprising a magnificent suite of apartments, viz.- the drawing-room, library, dining-room, ante-chambers, etc., commands a splendid view of the surrounding country … [the project] exhibits substantial proofs that by the combined agency of A RESIDENT GENTRY, and the industry of the people, the county of Carlow may fairly look forward to future progress and prosperity.

On 28th June 1849, the Captain noted in his diary that ‘a.m. arrival at Lisnavagh with Wife and Children for first time to take up our Residence there’.

Another rare photograph of Lisnavagh House before to the reduction showing the south or terrace front familiar from the Daniel Robertson drawing and the Gothic arcaded loggia on the east front which opened out on to a terraced lawn. Only the section on the far right of the photograph was reworked in the ‘new’ Lisnavagh House

The effort of maintaining such a massive house, along with exorbitant building rates (a local tax), sporadic outbreaks of dry rot and financial concerns, compelled Lord Rathdonnell and his wife, the artist Pamela Drew (1910-89), to put Lisnavagh up for sale after the war.

It was nearly purchased by the English writer Evelyn Waugh (1903-66) who described it as a ‘large prosaic’ and ‘practical Early Victorian Collegiate building’. Waugh went so far as to print headed writing paper with Lisnavagh at the top. However, he ultimately decided to abandon his notions of moving to Ireland.

Shortly after the Waugh sale fell through in 1947, Lady Rathdonnell asked her uncle, the architect Aubyn Peart Robinson (1902-85) of Caroe & Partners of Westminster, for his views on Lisnavagh’s future. Among his dramatic solutions was the idea that the house be reduced to its present size.

In 1951, ‘Rejuvenate the Positive’ became the Rathdonnells’ enthusiastic motto as they commenced an extensive reduction of the original Victorian structure. The aim, as Lady Rathdonnell penned in her diary, was ‘to produce a 40-room hunting lodge out of an 80-room romantic rambling chateau’. She also painted a series of beautiful watercolours contrasting the original Lisnavagh with what the ‘new’ house might look like.

The west front of Lisnavagh House in the midst of the seismic operation that reduced the house in size by almost two thirds. The man in the trilby is my grandfather William Robert McClintock Bunbury (1914-59), fourth Baron Rathdonnell, standing with my late aunt Pamela Rosemary “Rosebud” (1948-2016). The four men pictured are presumed to be Jack Halpin with either Matt Brien of Ouragh [sic]; Tom Neill of Station Road; Mick Byrne of Newcestown; and Brian McCutcheon of Templeowen or Mick Gorman of Parc Mhuire. Courtesy of Sheila Halpin and Tony Roche

The project was overseen by the Dublin-based architect Alan Hope (1909-1965) with Peart Robinson as the ‘prime planner’. They opted to preserve that part of the house that stood over the basement, namely the servants’ quarters, enlarging rooms as necessary: the grand rooms in the other part of the house were demolished.

After much of what Lady Rathdonnell described as ‘bashing’, ‘hacking’ and ‘opening up’, the house was ‘cut in two’ in June 1952, along the line of the old kitchen, which today serves as the library. The demolition team of eight was headed up by Jack Halpin, a Tullow man who had cut his teeth working on blitzed buildings in London. Mr Halpin’s team took down all of the granite stones on the west face gable by hand, numbered them and then re-erected the gable as part of a new south-facing front.

My grandmother Pamela Drew (1910-89), Lady Rathdonnell, planned the reduction of Lisnavagh House with her uncle, the architect Aubyn Peart Robinson (1902-85), and kept a diary recording the works in progress beginning on Monday 27th August 1951 when ‘J. Halpin arrived to start operations on Back Door, etc.’ and concluding in February 1954 when ‘Work ceased’. June 1952 saw the momentous occasion when the house was described as ‘cut in TWO’ and the following month the gable of the drawing room was carefully dismantled by hand and renumbered for later reassembly. Here Lady Rathdonnell is pictured taking time out under the shade of a tree and we can date the photograph to the summer of 1953 when the gable was re-erected as part of the new south front. The remainder of the old south front was subsequently demolished and on the 3rd November 1954 Lady Rathdonell recorded that ‘Byrne’s bulldozers & two lorries swept all away’

As the E.S.B. Rural Electrification Scheme had reached the Rathvilly area by 1951, the Rathdonnells took the opportunity to replace the old carbide gas lighting system with electricity. Likewise, they recruited Robert Jacob of Waterford to install a new oil-fired boiler in place of an earlier central heating system from 1929.

A reception room on the east side of the house, completed in 2016, was designed by the Bunburys in conjunction with Anthony Johns Landscape Design incorporating 1,000 square feet of the original outbuildings and stables with a 1,000 square foot new build that mirrors the granite façade.

An aerial photograph taken by Carl Whinnery during the summer drought of 2018 showing the ghostly plan where the exterior and interior walls of the vanished section of Lisnavagh House once stood; the outlines of three polygonal bay windows, one on each front, are also visible

One hundred and seventy years after the Captain and his family moved in, and nearly seventy years after the reduction, Lisnavagh House is working smoothly as both a family home and as one of Ireland’s most upmarket country retreats. The house is run by William McClintock Bunbury, a grandson of the fourth Baron Rathdonnell, and his wife Emily. Visit www.lisnavagh.com

The ‘new’ Lisnavagh House, County Carlow, following the reduction carried out by the Bunburys in the 1950s. Mark Bence-Jones, writing in 1978, remarked that ‘because of the irregular plan of the house as it originally was, the service wing only abutted the main building at one corner…so that the surviving part of the house looks complete in itself; a pleasant Tudor Revival house of medium size rather than a rump of a larger house’. Photograph by James Fennell

Turtle Bunbury is a best-selling author, historian, public speaker and TV present. His books include the acclaimed Vanishing Ireland series, The Glorious Madness – Tales of the Irish & the Great War (2014), Easter Dawn (2015) and 1847 – A Chronicle of the Genius, Generosity & Savagery (2016). His next book, Adare Manor – Renaissance of an Irish Country House, will be published in December 2019.  Visit www.turtlebunbury.com