Building of the Month - February 2017 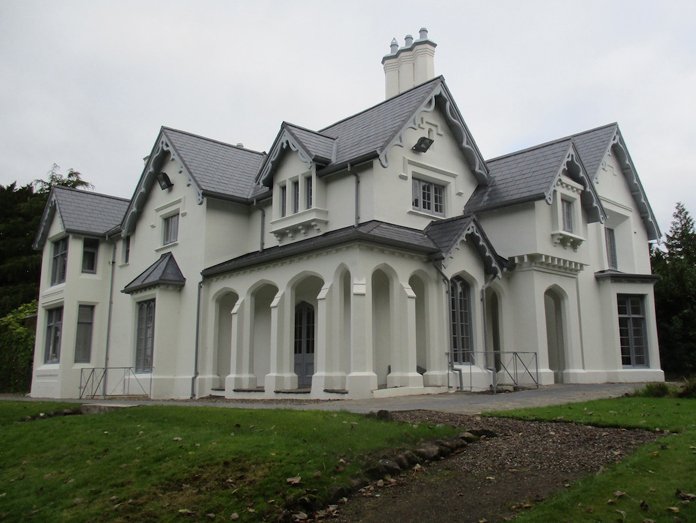 Derravoher, North Circular Road, Limerick, a picturesque suburban villa built by and for William Henshaw Owen (1813-53) on a site leased (1839) from (Sir) Matthew Barrington (1788-1861). The house has known many names over the course of its history including Glendower, Lansdowne Cottage, Riverview and, finally, Derravoher. Purchased by Villiers School in 2012, a restoration of the house was completed from 2014 to 2016 under the supervision of Gráinne McMahon MRIAI, project architect and project planner

The origins of the suburb which provides the setting for Derravoher, on the outskirts of Limerick, can be traced back to the early nineteenth century when the construction of Wellesley Bridge (1824-35), subsequently renamed Sarsfield Bridge, opened up previously undeveloped tracts of land on the northern banks of the River Shannon. Writing in A Journey Throughout Ireland (1834), Henry D. Inglis remarked that ‘some extensive embankments are now in course of being constructed below Limerick, with the view of reclaiming land. One of these, the lowest down the river, is undertaken by a Scotch gentleman [while] the others are undertaken by Lord Lansdowne and by Mr. Barrington; and there is no doubt of the ultimate success of all these attempts’. Later, in his essay titled “Architecture in nineteenth-century Limerick” (1957), Myles Cunningham noted that ‘the building of the new bridge enhanced the value of Barrington Leaseholds along what is now the North Circular Road’.

In addition to Lansdowne and Barrington, a key figure in the early development of the Circular Road suburb was William Henshaw Owen (1813-53). One of seventeen children born to Jacob Owen (1778-1870), architect and engineer, the younger Owen joined his father in service at the Board of Public Works and was sent to Limerick in 1836 to act as the Board’s representative in the city and to serve as resident engineer to the Shannon Commissioners. As an engineer Owen oversaw the construction of Thomond Bridge (1836-40) to designs by James Pain (c.1779-1877) and George Richard Pain (c.1793-1838) and was solely responsible for the design of Mathew Bridge (1844-6) which replaced the eighteenth-century New Bridge at a crossing over the Abbey River. Owen’s contribution to the fabric of Limerick extended to the Classical temple-like Savings Bank (1839), on the corner of Glentworth Street and Catherine Street, and a new potato market (1843) on Merchants Quay.

One of the first plots of land on the new Circular Road for which we have information adjoins the Derravoher site and in 1838 (Sir) Croker Barrington (1817-90) commissioned from Owen the design for a house to be named “Woodville House”. The house had acquired the name “Tivoli” by the time it appeared on the first edition of the Ordnance Survey (surveyed 1840; published 1844).

The first legal document for the Derravoher site, a 999-year lease, was signed on the 17th February 1839 by Croker Barrington’s father, (Sir) Matthew Barrington (1788-1861), and Owen. A map accompanying the lease includes a footprint of the proposed house by Owen who, in a nod to his Welsh ancestry, intended to name his new home “Glendower” in honour of Owain Glyndwr (c.1359-c.1415), the last native Prince of Wales who was recreated as the father of Welsh nationalism in the nineteenth century. The name was not to last, however, and the house has known many titles over the course of its history.

A detail of the lease signed on the 17th February 1839 by Barrington and Owen. A footprint of the proposed house, which Owen intended to name “Glendower” in honour of the last native Prince of Wales, is signed W.H. Owen

The terms of the 1839 lease were strict and Barrington was adamant that only one house was to be built on the site. Under no circumstances would a commercial venture be permitted and, in case this instruction was interpreted otherwise, he explicitly prohibited ‘any of the trades or businesses of a Vintner Distiller Brewer Alehouse Keeper Victualler Coffee House or Tavern Keeper Tripe Boiler Tripe Seller Cheese Monger Poulterer Fishmonger Slaughterman Butcher Baker Pastry Cook Fruit or Herb Seller Soap Boiler Tallow Chandler Tallow Melter Sugar Baker Dealer in old Iron Blacksmith Farrier Working Cutler Chimney Sweeper Bagnio Keeper Coachmaker Whitesmith Coppersmith Brazier Caricature Printer Seller Working Tinsman Plumber Dyer Brick or Lime Burner or any other noisome noisy of offensive trade or business whatsoever without the express consent in writing of Matthew Barrington’.

In contrast to the restrained Classicism he used for Tivoli, the villa Owen designed for himself is rooted firmly in the “picturesque” style and was described by Cunningham as showing ‘a flair for Welsh Gothic detail’. The principal front boasts as its centrepiece a projecting breakfront with Tudor-headed arcaded open porch. A drawing room on the south-western corner opens out onto a Tudor-headed arcaded loggia allowing sheltered views overlooking the terraced lawns while the dining room on the south-eastern corner includes an unusual triangular-plan bay window. Overhead, the rooms on the first floor are partly accommodated within the roof space with a small number lit by jettied oriel dormer windows. Indeed, the roof is arguably the most ornamental features of the building, even overshadowing the comparatively plain interior, with scalloped and sinuous open work bargeboards decorating each and every gable and gablet.

An extract from Griffith’s Valuation (1853) showing the particulars for the house which was then known as “Lansdowne Cottage”. The occupant is given as Richard Fade Goff (d. 1867) and the lessor as William Charles Burgess (d. 1857). The value of the land is given as £5.0.0. and the buildings are valued at £18.0.0.

A number of secondary sources give us information on subsequent occupants of the house that was named as “Lansdowne Cottage” on the first edition of the Ordnance Survey. A notice in The Gentleman‘s Magazine (1843) mentions the marriage of ‘Kate-Maria, third dau. of Hugh Fennessy, Esq., late of Lansdowne Cottage, Co. Limerick’ while Slater‘s National Commercial Directory of Ireland (1846) names ‘William Smyth, Esq., Constitutional Court Proctor, [of] Lansdown [sic] Cottage’. Griffith’s Valuation (1853) lists Richard Fade Goff (d. 1867), Manager of the National Bank, as occupant. The lessor is William Charles Burgess (d. 1857) and in the ledger the particulars of the site are given as 0a., 3r, 35p. with the land valued at £5.0.0. and the buildings valued at £18.0.0..

An extract from Sheet V73 of the Ordnance Survey (1870) showing the house, named “River View” [sic], and its landscaped grounds including a flagstaff and summerhouse. The neighbouring property, Tivoli, became the home of Villiers School in 1953 and the Board of Governors purchased Derravoher in 2012 with the intention of using the house and grounds as an extension of the school campus

The next lease on file is dated 1863 and is signed by Thomas Revington of Ardhu House and Francis Cherry Sikes (d. 1865), a Quaker who owned a grocery at 112 George’s Street. It was Sikes who renamed the property as “Riverview”, owing to its commanding vistas overlooking the River Shannon, and his widow Eliza continued to live in the house until her death in 1892.

Sir Alexander William Shaw (1847-1923), proprietor of Shaw and Sons of Mulgrave Street, is given as the occupant of Riverview in the 1911 Census. Shaw seems to have been responsible for the final change of name to “Derravoher” as an obituary to his son, Captain Gordon Thompson Shaw (d. 1918), refers to the ‘youngest son of Sir Alex. and Lady Shaw, Derravoher, Limerick’.

The Board of Governors of Villiers School purchased Derravoher in 2012 with the intention of using the house and its grounds as an extension of the Villiers School campus which was founded in Henry Street in 1821 and which had relocated to the adjoining Tivoli in 1953. A restoration of the house was overseen by Gráinne McMahon MRIAI and included the reinstatement of a natural slate roof and the repair of its decorative timber work; the conservation of the windows reproducing the distinctive wrought iron “monkey tail” handles and stays where the originals were lost; the insulation of the floor and roof spaces; the installation of a period-style tile floor in the entrance hall; and the upgrading of the electrical works, including data points and projectors, to satisfy contemporary educational standards. Universal access is provided for students on the entire ground floor and includes a limestone flagged path linking Derravoher to the classrooms in Villiers School.

A detail of the wrought iron “monkey tail” handles whose sinuous forms give a discreet decoration to the restored windows. Despite the change of use to reading rooms and study rooms, evidence of the domestic origins of the house, and the staff required to maintain and run a suburban villa, survives in the form of a servants’ call panel with bells labelled “Hall Door”, “Dining Room”, “Sitting Room” and “Bedrooms”

The restored house is a fitting tribute to Trevor Morrow of the Board of Governors who passed away in February 2016 but who, as a perceptive advocate of the school’s improvement programmes, was a driving force behind the acquisition of Derravoher as part of the Villiers School campus.

Gráinne McMahon B. Arch. (1st Hons.) MRIAI spent five years in Genoa and Venice, Italy, where she worked with Macuso Architetti and Renzo Piano Building Workshop. On her return to Ireland in 1990 Gráinne was nominated by the Arts Council as one of Ireland‘s Six Promising Young Architects. She set up practice in the Clare/Limerick area and has completed a body of medium to large scale work that includes both conservation and restoration works to protected structures and new build educational and sports buildings. Clients include Stolichny Bank, University of Limerick and Limerick Institute of Technology. Gráinne has exhibited works in Open House Limerick 2014-2016. Gráinne was the project architect and project manager on the restoration of Derravoher

cáit ní cheallacháin B.Arch. FRIAI is a Grade 2 Conservation Architect living and working in Limerick. Together with historian, Dr. Ursula Callaghan, she devised, researched and ran a pop up museum at 5 Rutland Street – a building dating from the 1770s – as the Limerick Chapter of the Irish Georgian Society’s project for the Limerick City of Culture 2014. cáit was the conservation consultant on the restoration of Derravoher and compiled the history for the above Building of the Month