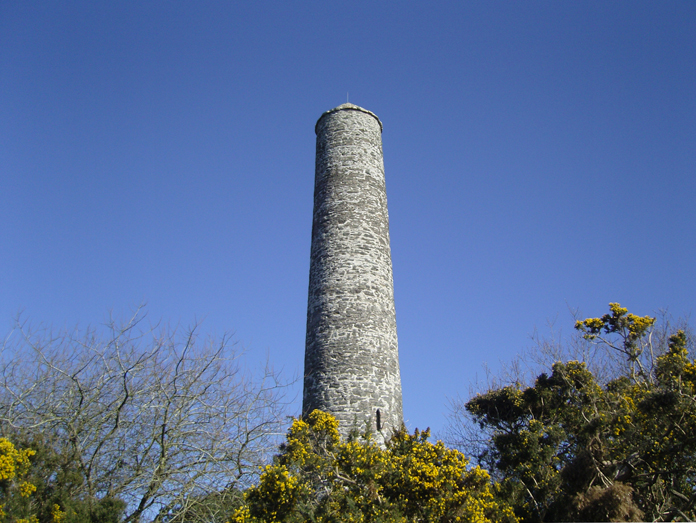 The Crimean Monument, Ferrycarrig, County Wexford, photographed on the 4th March 2015 following its restoration in October-November 2014

The visitor now draws near to the bridge of Ferry Carrig, with its old guardian tower on the right, and the new and lofty circular fabric on the left – the sides of the precipices, on the parts of which they stand, in the full freshness of their verdant summer dress, appearing to the best possible advantage. The amateur or artist who may be disposed to employ his pencil in depicting the striking and varied beauties of this renowned locality will now find another highly-important adjunct, which, whether looked upon as an object suggestive of sympathy for the loss of the young and the brave, whose memory it has been erected to commemorate, and the recollection of whose gallant and heroic deeds it is so well calculated to perpetuate, or, as a faithful representation of the old pillar temples of the country, must, in a pictorial point of view, be considered of the most unquestionable advantage to those who delight in sketching scenes of natural and artificial beauty.

So begins Thomas Lacy’s description of the Crimean Monument, Ferrycarrig, County Wexford, shortly after its unveiling in 1858.

The Crimean War (October 1853-February 1856) claimed over 600,000 in a conflict in which Russia lost to an alliance of Britain, France, the Ottomnan Empire and Sardinia-Piedmont. Irish soldiers made up approximately one third of the British forces and it is estimated that almost 7,000 Irish soldiers were killed in the conflict. The conclusion of the war was celebrated in Ireland at the Great Crimean Banquet which took place in the Tobacco Stores, Dublin, on the 22nd October 1856. Soon thereafter monuments were erected across Ireland to remember those lost in the war.

The Crimean Monument, Ferrycarrig, County Wexford, photographed on the 12th October 2014 with the scaffolding in place in preparation for its restoration

The design for the monument commemorating the men of Wexford lost ‘in the sanguined field of Ballaklava and Inkerman’ has been attributed to Edwin Thomas Willis (1835-1905) of Rowe Street, Wexford, and the foundation stone was laid on the 8th October 1857 by George William Frederick Howard (1802-64), seventh Earl of Carlisle and Lord Lieutenant of Ireland (fl. 1855-64). We are led to believe that a time capsule was buried in the base containing a copy of the newspaper of the day, a list of subscribers who donated £300 towards the cost of construction, and the parchment scroll used at its dedication. The round tower, while giving the false impression of early Christian origins, can claim an archaeological precedent by default as the stone work used in its construction was uprooted from the FitzStephen ringwork on the site. The completed monument was unveiled in July 1858.

The Crimean Monument, Ferrycarrig, County Wexford, photographed on the 3rd November 2014 at the topping out ceremony attended by Ivor McIlveen Associates and officials from the Department of Arts, Heritage and the Gaeltacht and Wexford County Council

One hundred and fifty years of exposure eventually took its toll on the monument and, following the offer of a grant from the Department of Arts, Heritage and the Gaeltacht under the Conservation Works to Heritage Buildings in State Care Grant Scheme 2014, its restoration was undertaken by Ivor McIlveen Associates on behalf of Wexford County Council.

Initial inspections carried out in January 2013 and following Storm Darwin in February 2014 had highlighted the hazards presented by the tower which, due to storm damage and prolonged weathering, was under threat of partial or total collapse. A 3D laser scan survey confirmed that the “cap” had probably been struck by lightning, resulting in a hole visible from the inside of the tower, while further dislodged stone work presented the risk of falling masonry. In addition, a series of fissures, some rising to a height of nine feet, surrounded the base of the tower with the most prominent in line with the impact hole in the “cap”, giving further evidence of a lightning strike.

The Crimean Monument, Ferrycarrig, County Wexford, photographed on the 4th March 2015 showing the stone work repaired and repointed using a gauged hot-lime mortar which, in terms of aesthetics, is an excellent match in colour and has already begun to blend with the existing mortar

The round tower, a familiar landmark to anyone entering Wexford from the Dublin side, was temporarily hidden from view behind scaffolding in October 2014 in preparation for its restoration. A cross brace stitching system and deep grouting was used to repair the fissures around the base. Localised pocket masonry repairs were also required and, following general raking and repointing, the base was finished with a shelter-coat of limewash. Overhead, raking and hot-lime repointing of the stone work was carried out where necessary. The dislodged stones on the “cap” were carefully reset and a lightning conductor installed. The latter was almost tested during the topping out ceremony on the 3rd November 2014 when storm clouds loomed ominously overhead.

A panel is inscribed: IN MEMORY OF THE OFFICERS, NON COMMISSIONED OFFICERS AND MEN OF THE COUNTY WEXFORD WHO LOST THEIR LIVES IN THE CRIMEAN DURING THE WAR WITH RUSSIA 1854 ’55 ’56

The completed restoration ensures that the Crimean Monument, as Lacy predicted, ‘is likely to endure for the ages…and will serve to convey to posterity the unquestionable fact that the men of Wexford of the present day have not degenerated from the courage and bravery of their ancestors’.

The Crimean Monument is one of numerous sites across the country for which records have been prepared by the National Inventory of Architectural Heritage (NIAH) and the National Monuments Service (NMS). Both sets of records can now be accessed on the recently-deployed Historic Environment Viewer accessible here.

Lacy, Thomas, Sights and Scenes in Our Fatherland (London: 1863)