Building of the Month - November 2016 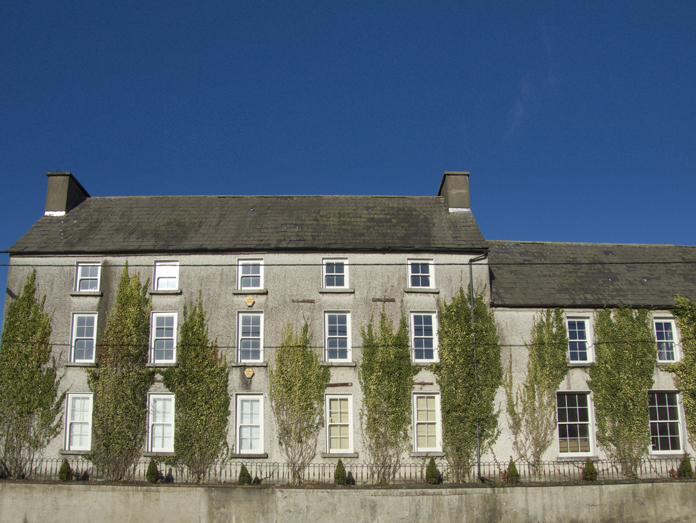 Collon House, occupying a prominent position in the centre of Collon, County Louth, owes its origins to Anthony Foster (1705-79), Chief Baron of the Irish Exchequer (fl. 1766-77), who in the early 1740s built a house reminiscent of the traditional Irish longhouse. Although showing evidence of subsequent contraction and expansion, the original form of the mid eighteenth-century house can be discerned without difficulty: an elongated rectilinear footprint of eighteen bays; one room deep; and an unshowy façade dependent on proportion for architectural “effect”. The interior is similarly plain with long low panelled rooms featuring prominent beams. Overt decoration is limited to one apartment with its Tuscan columnar screen, round-headed alcoves framing a rose-coloured marble chimneypiece, and simple moulded plasterwork cornices.

Collon House was reduced in length when a portion was absorbed by the adjoining Elmview but the resulting deficiencies in accommodations were addressed by the addition of an extra floor in 1770, its roofline shared in common with a new front added by John “Speaker” Foster (1740-1828), first Baron Oriel and the last Speaker of the Irish House of Commons before the Acts of Union (1800). The new front, oriented to face west, is entered by a central pilastered porch and boasts robust limestone block-and-start dressings around the window openings. In addition to a hall the new front houses a saloon at garden level with bedrooms overhead accessed via a double-height stairhall with turned timber staircase. In contrast to the sobriety of the earlier rooms, the light and airy new apartments feature Classical-style chimneypieces and high ceilings with decorative plasterwork cornices and centrepieces.

The modest appearance of Collon House has often been alluded to. Its original setting was a sparse and unproductive hinterland. However, Arthur Young, in his Tour of Ireland (1780), gives a detailed account of the infrastructure Foster and his late father put in place to encourage farmers and labourers into the locality and the resulting village was later described by Isaac Slater (1846) as “a respectable and rather extensive [place]… It is one of the neatest villages in Ireland, and owes the greater part of its attractions to the taste and liberality of the late Lord Oriel, who built the main street after his own designs, and at his own expense”. A seemingly unforeseen consequence of the village, however, was the lack of privacy for the landlord who now had tenants passing right by his door. The new front may have been a first attempt at addressing this oversight but in 1776 Foster began to create a new estate on neighbouring lands with the centrepiece taking the form of a garden temple with pedimented portico. Nearing the end of his life, Foster set about an ambitious transformation of the temple with the resulting house titled Oriel Temple (1812). The cost of this new house, in addition to the cost incurred by the maintenance of a townhouse in Dublin and a suburban house in Stillorgan, may have rendered any further attempts at keeping Collon House abreast of contemporary fashions redundant.

John Foster’s son, Thomas Henry Skeffington (né Foster) (1772-1843), married Harriet Skeffington (d. 1831) in 1810 and their eldest son, John Skeffington (1812-63), succeeded to the title of tenth Viscount Massereene in 1831 and inherited the Antrim Castle estate. Thereafter the family appear to have resided only occasionally in Collon and Oriel Temple is registered in the 1911 National Census of Ireland as occupied by the gardener of ‘Viscount Massereene of Antrim Castle’; Collon House by Edward Gargan (d. 1935), a farmer.

Described in the 1970s as being in a near ruinous condition, ownership of Collon House subsequently changed hands on a number of occasions. Its present owners, Michael McMahon and John Bentley-Dunne, have recently carried out a painstaking restoration of Collon House which required extensive research and the sourcing of appropriate materials to refurbish its defining architectural features. The principal reception rooms are now beautifully furnished with period antiques and paintings which, along with the parterred gardens, evoke the atmosphere of early Georgian living.

At the An Taisce Ellison Awards Ceremony held on the 1st of November, 2014, the restoration of Collon House was awarded joint first prize under the Conservation and Restoration category. In their adjudication of the project, An Taisce remarked:

“The owners of Collon House have given new life to what was the residence of one of the major Irish political figures of the eighteenth century, John “Speaker” Foster, the last speaker of the pre-Act of Union Parliament. The conservation work, interior decoration and furnishing has been carried out with great sensitivity in retaining and enhancing the distinctive quality and atmosphere of the house”.

Collon House is a member of Hidden Ireland. Click here for more information.