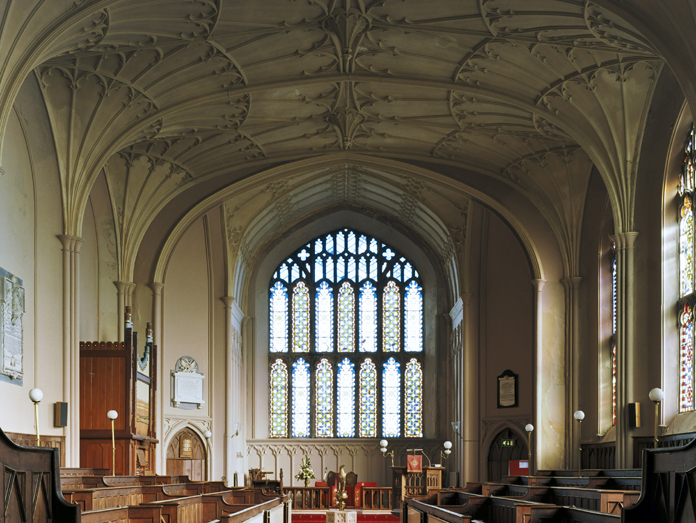 On entering the church the first impression is of a large open space devoid of breaks or pillars in the structure. On either side of the central aisle the pews are arranged facing each other in the collegiate style and not forward towards the chancel. The interior is lit by a series of brightly-coloured stained glass windows including the impressive East Window designed by Louisa Catherine Beaufort (1781-1867) in bold semi-abstract patterns with allusions to the sun, moon and stars. Overhead, the stunning plasterwork ceiling is said to be by William Edgeworth (1794-1829), son of Richard Lovell Edgeworth (1744-1817) and brother of the novelist Maria Edgeworth (1768-1849). On closer inspection, there are numerous other engaging details throughout the church.

Figure 4: A view of the impressive interior of Collon Church. Lewis’s description of the church mentions ‘the interior [of] 90 feet by 40, the ceiling beautifully groined. It has five windows of the south side, besides a large east window over the altar. All the side windows are of stained glass, the gift of the present Baron Foster [Thomas Henry Skeffington (né Foster) (1772-1843), second Baron Oriel]; the east window is in course of preparation, being the gift of the impropriator. Under the church is the burial-place of that family, and in it is a marble monument to the memory of Catherine Letitia Foster, widow of William, Lord Bishop of Clogher, which was erected by her daughter, the Countess of Salis’

The system of collegiate seating, while present at King’s College, also bears comparison with the chapel of Trinity College, Dublin. In fact, if one examines Collon and Dublin, one can see how very similar the seating is. We know that both Beaufort and Foster attended Trinity College – indeed, Beaufort preached in the chapel – and it seems very possible that Beaufort used the seating arrangement there as the model for Collon. Collegiate seating enhances the acoustics of a choir. The choir master, standing in the central aisle, can direct the choristers to raise or lower their singing voices to achieve a perfectly balanced sound. Collon Church gives a wonderful acoustic during concerts and services and has been used as a venue for Baroque concerts as part of the Ardee Baroque Festival.

Figure 5: A detail of the stained glass East Window designed by Louisa Catherine Beaufort (1781-1867) featuring in its uppermost section an abstract representation of the sky at night with the moon shown in two cycles, planets, stars and golden-tailed shooting stars

Louisa Catherine Beaufort’s East Window is unusual in that it is quite secular in theme with no obvious religious references. The uppermost section conveys an abstract representation of the sky at night, perhaps an indirect allusion to Heaven, and is filled with blue glass dotted with clear stars. The moon is shown in two cycles – the Full Moon and the Crescent Moon – and there are also two planets with Saturn identified by its ring. The daggers are filled with golden-tailed shooting stars and, unusually, some stars are shooting down and others shooting up!

The splendid ceiling is a lath-and-plaster reproduction of a vaulted stone ceiling and is clearly modelled on the chapel of King’s College. On a recent visit to Collon Church, Professor Bruce Campbell of Queen’s University, Belfast, suggested that Beaufort may originally have planned a flat ceiling with fan-shaped pendants similar to the ceilings at Charleville Forest (1800-12), County Offaly, by Francis Johnston (1760-1829). However, while work on the church was well underway the design was altered and it was decided to attempt, so far as was possible, a replica of the King’s College ceiling. This change of heart may have been influenced by Richard Lovell Edgeworth and it is believed that his son, William, was responsible for the design which, due to the narrower dimensions of the nave at Collon, is a variation on, rather than a faithful facsimile of the Cambridge ceiling.

Collon Church is substantially unchanged since it was finished in 1815. The only period of significant alteration was in the 1880s when it was decided to dismantle the original three-tiered pulpit. There is a charming anecdote about this pulpit which may strike a chord with the modern builder. When the pulpit was first installed, Beaufort is said to have asked the builder to climb up to its top tier and say a few words to see if he could be heard clearly from all corners of the church. The builder complied and, having reached the summit, cried out: “When can I expect my money?”

Figure 12: On the south side of the church is a group of three Russian Orthodox Cross headstones marking the graves of a family who fled the October Revolution in 1917 and who eventually settled in Collon in the 1930s. One headstone commemorates Nikolai Ivanovich Couriss (1896-1977) and a second his wife Ksenia Nikolaevna Couriss (née Bibikova) (1895-1966) who is reputed to have been a lady-in-waiting to the last Czarina. A colourful rumour once circulated that Couriss taught Russian to intelligence agents and, although never substantiated, photographs exist which are said to show George Blake (b. 1922), the double agent, at Collon

Collon Church is an eccentric and engaging building. We happen to know a great deal about the church whether by studying the building on its own; studying the buildings associated with it; or studying the large amount of surviving original documents relating to it. The church is a continuously evolving archive that allows one to construct a living history of life in Collon, County Louth and Ireland in general in the eighteenth, nineteenth and twentieth centuries. It is hoped that those entrusted with Collon Church will secure its future for the benefit and enjoyment of generations to come.

John Rountree is a local historian from outside Ardee, County Louth. He is the chairman of a local group who are helping to maintain and preserve the historic Collon Church