Building of the Month - September 2016 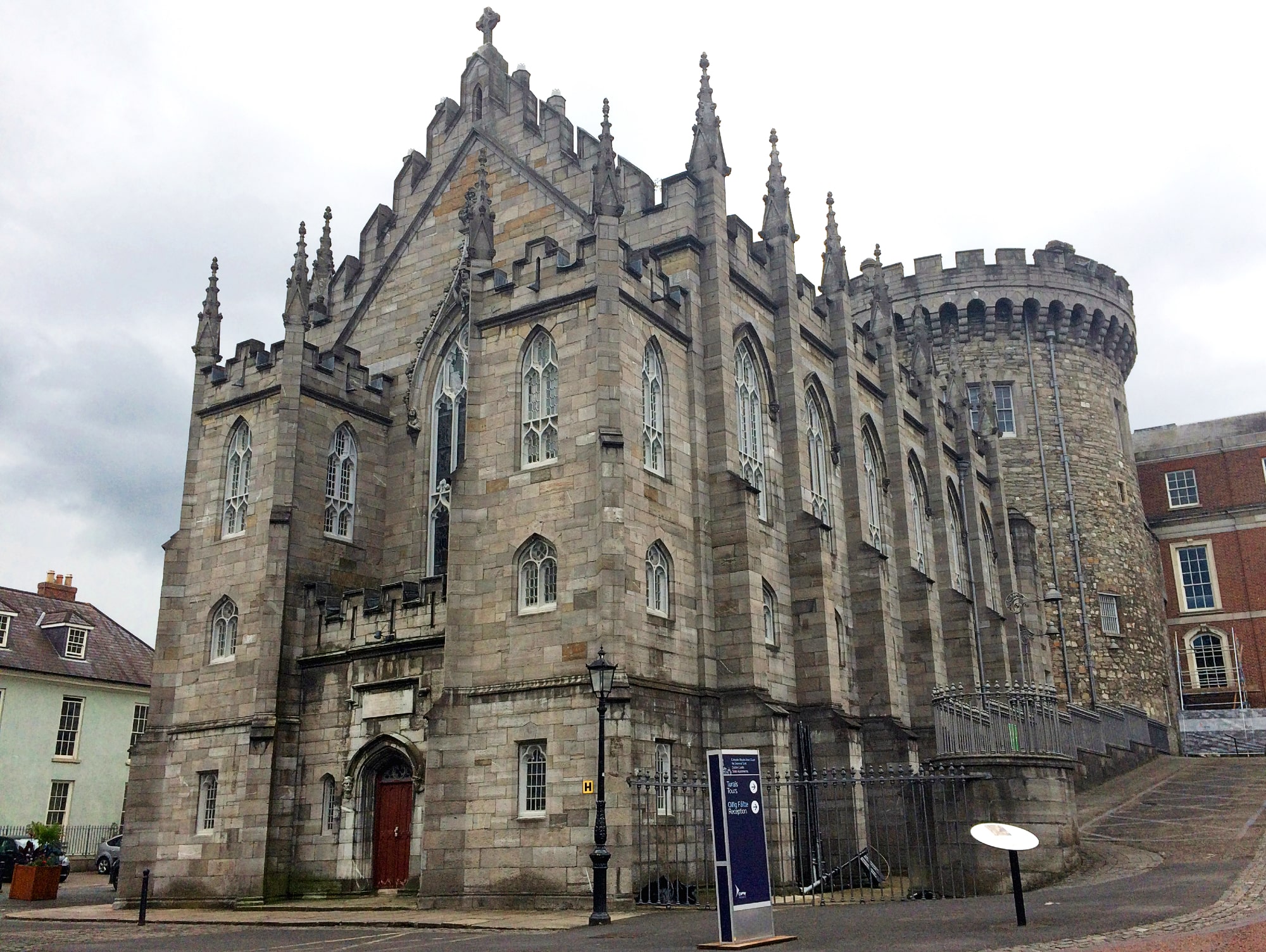 A view of the Chapel Royal (1807-14) at Dublin Castle designed by Francis Johnston (1760-1829) adjoining the medieval Wardrobe TowerAs the bells tolled at midnight on the 31st December 1800 they rang in not just a new year but a new era. No longer a separate kingdom with its own Parliament, Ireland now constituted part of the United Kingdom of Great Britain and Ireland, a new political construct bearing a raft of political changes. Almost immediately the merger of the British and Irish parliaments focused attention on that other, remaining lever of government, the viceregal court. If political power could be united under one roof in Westminster, was it necessary to maintain the court of the deputy king?

Such questions obviously festered, for in 1801 we find the Bishop of Meath, Thomas Lewis O’Beirne (1749-1823), writing to the Chief Secretary at Dublin Castle, Charles Abbot (1757-1829), suggesting ways in which the viceroy might consolidate the recently weakened position and status of his office [1]. He ‘advocated that the viceroy publicly support the church and give a good example in his own religious practice’ [2].

Eking out such a new role offered a promising way forward. Yet the architectural circumstances of the viceregal court at Dublin Castle lent little support to the idea. The extant castle chapel, in existence as an institution since at least 1225 [3], and architecturally dating back to the 1680s, was in such a bad state of repair that James Malton (1761-1803), engraver and watercolourist, described it as being ‘little consistent with its attachment to a royal palace’ [4]. Although home at various time to rich hangings, expensively bound religious books and possibly to a glittering collection of silver-gilt altar plate it has been described as being little more than a ‘mean structure, built of brick’ [5]. Although serviceable, it did not provide the kind of set piece that Bishop O’Beirne’s new role required. Something equal to the spectacle of the State Apartments, endowed with spaces like the Throne Room and Saint Patrick’s Hall, spaces designed with ceremony and stateliness in mind, was called for.

A scheme for a new chapel was soon discussed, in late 1801, between the Chief Secretary and the architect James Gandon (1743-1823). Gandon prepared seven designs, now lost, but wary of encroaching into the realm of the Board of Works architect, he eschewed the job [6]. The idea lay dormant until 1807 when the board commissioned its own recently appointed architect, Francis Johnston (1760-1829), to prepare a scheme. 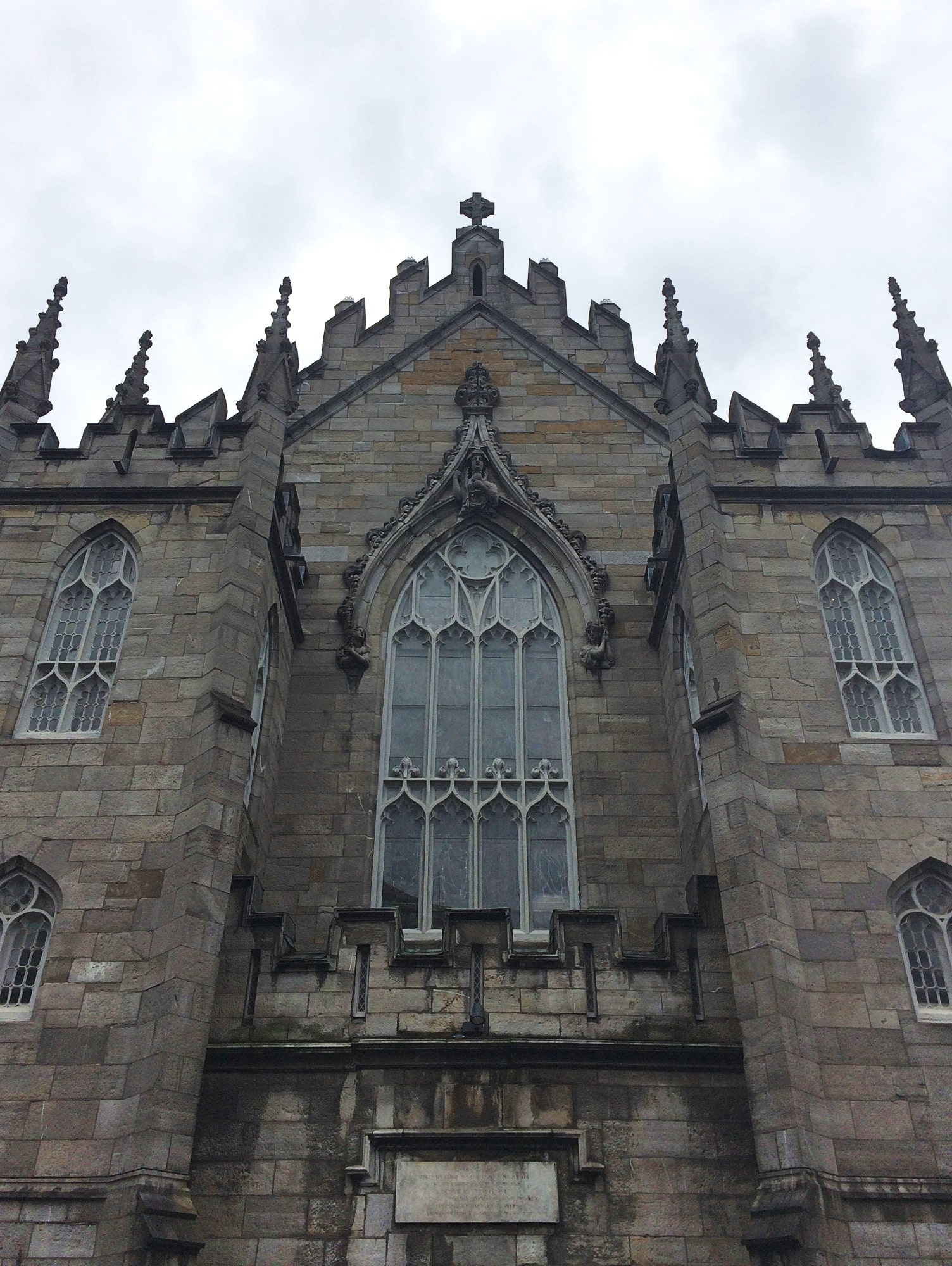 What Johnston created was not just a space in which the viceroy could worship, but a tour de force of architecture as theatre. It was not just a church, it was a stage for state ceremonies and the display of viceregal pomp. It equalled if not surpassed any of the courtly rooms contained within the State Apartments. The exterior, faced in limestone, sits neatly east of and adjacent to the old medieval Wardrobe Tower, renovated at the same time with the addition of an additional storey, topped with battlements. It is relatively ‘plain and simple’ in Johnston’s own words [7]. “Relative” is an important qualification, however. One hundred and three heads, carved in Tullamore limestone, ornament the exterior. These are the work of Edward and John Smyth, father and son, and represent a variety of kings, queens, archbishops and ‘grotesques’ [8]. Notable are the heads of Brian Boru and Saint Patrick, either side of the entrance to the crypt; Queen Elizabeth I on the north façade; and Saint Peter and Jonathan Swift above the main entrance. Sitting prominently on the eastern gable is a relatively early example of a carved ringed, or Celtic, cross. Taken together this iconographical programme suggests an attempt to link the relatively new, reformed Church of Ireland with the Christianity of ancient Ireland.

When one enters the nave, all sense of Johnston’s ‘plain and simple’ is left behind. Every surface of the interior bristles or shines with embellishment. The nave is flanked on either side by narrow galleried aisles, while an organ hovers over the west door, opposite an impressive east window. The overall impression of the proportions is one of soaring height. Although instinct would suggest a creamy-coloured Caen stone as the construction material, a light tap on the walls or columns will produce a hollow thud. Hidden behind the exterior’s limestone ashlar facing is a structure of timber, cleverly covered in painted plaster. Plasterwork fan vaulting, inspired by Henry VII’s chapel at Westminster Abbey, is by the hand of George Stapleton (1777-1841) while a host of modelled plasterwork heads are by the Smyths, likely the work of John (the younger) after the death of his father in 1812 [9]. These heads in particular lend an almost baroque feeling to the interior, their turns, stares and movements vividly animating the space. The galleries of the upper levels boast the coats of arms of many former Irish viceroys, carved in wood by Richard Stewart. 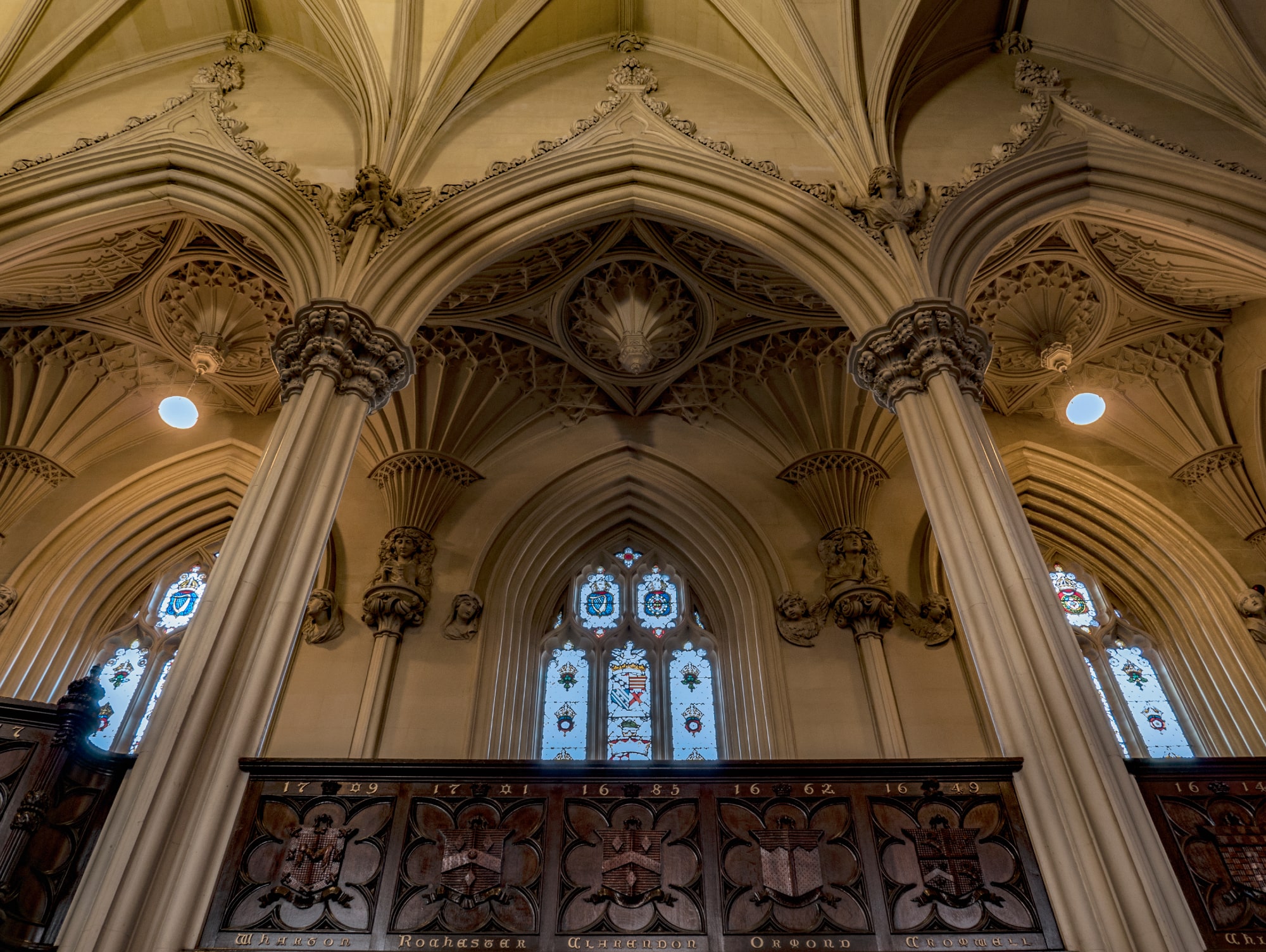 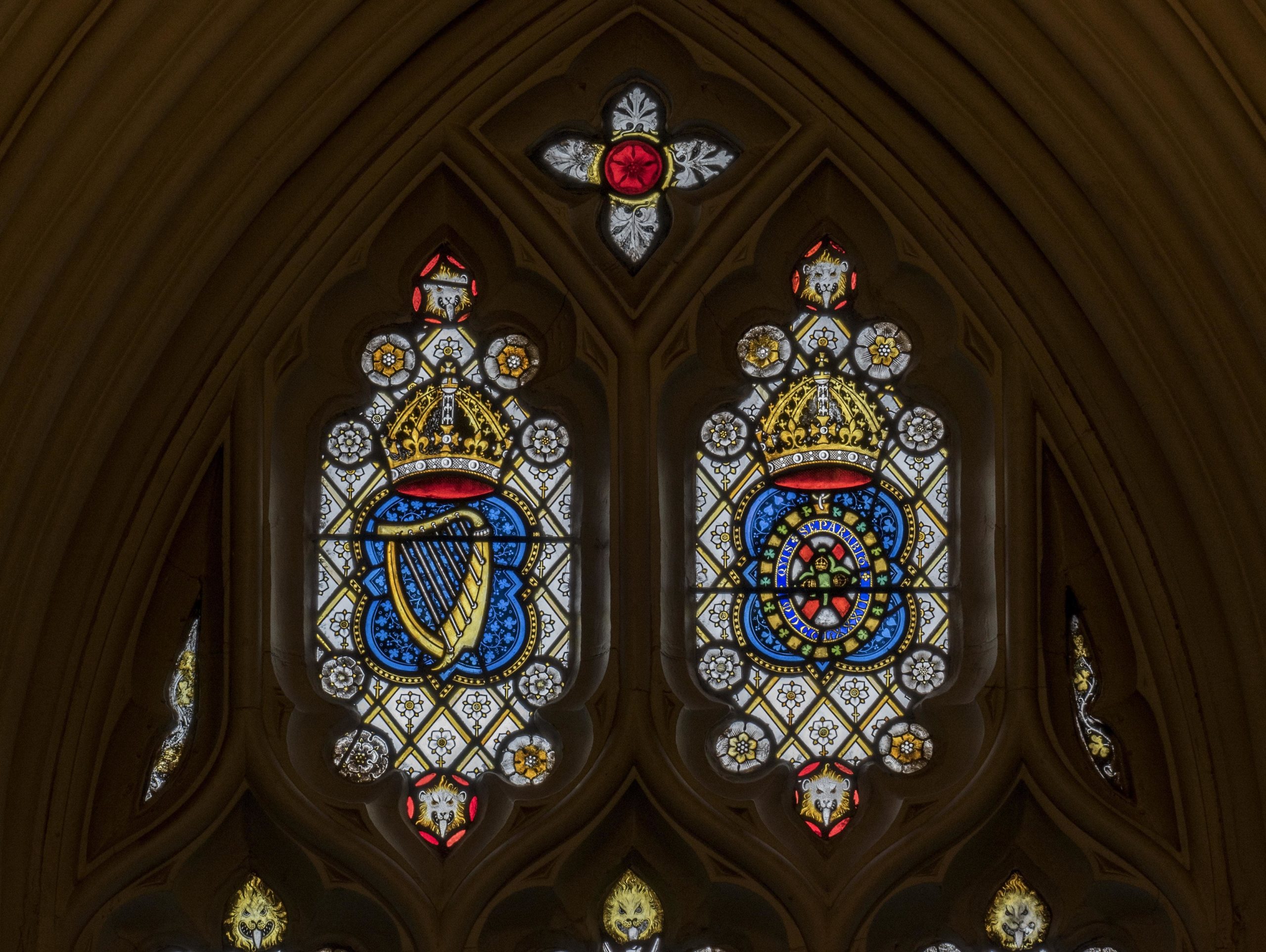 The window at the east end was created by Joshua Bradley in 1815, the central panels – reputedly of northern European, medieval origin – being a gift from the viceroy at the time, Charles Whitworth (1752-1825), first Viscount Whitworth. In the centre of the east end of the nave, in front of the altar, a large, elevated pulpit dominated the space, holding equal prominence with the viceregal and clerical box-pews on the upper level galleries. Echoing the themes of the exterior, this richly carved piece featured the coats of arms of those largely responsible for the Reformation and its consolidation – Henry VIII, Edward VI, Elizabeth I and William III – and was supported by a pedestal resting on an open Bible. Its prominence, at the expense of the altar, and its decoration placed a heavy emphasis on the Bible and the word of God as the focus of the service.

Lord Whitworth presided over the opening of the Chapel Royal on Christmas Day in 1814. At this point the building and decoration costs had reached £42,350 [10]. This was in marked contrast to the original estimate of £9,532 furnished by Francis Johnston [11]. Yet the expenditure didn’t end there. A further £8,510 was spent on it the following year, bringing the total to well over £50,000. This was a colossal sum at the time, which can be put into some context when compared to Johnston’s General Post Office on O’Connell Street – although several times the size of the Chapel Royal, it cost roughly the same price to build. 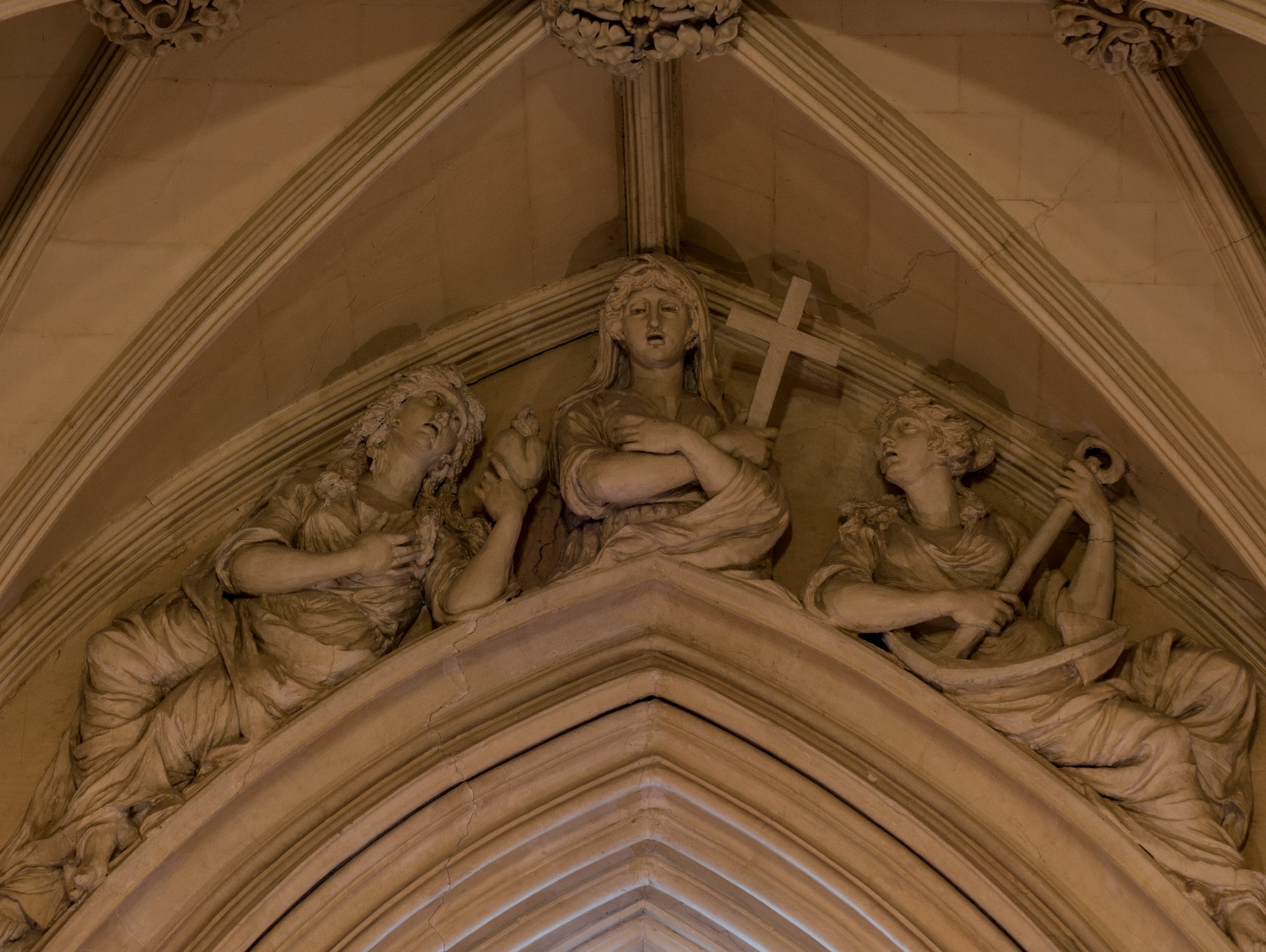 The subsequent history of the Chapel Royal is too long and detailed to lay out in full here, but a brief synopsis may suffice. With the arrival of George Howard (1802-64), seventh Earl of Carlisle, as viceroy in 1855, it underwent a colourful facelift. The pulpit mentioned above was removed to nearby Saint Werburgh’s; a new organ was commissioned in 1856; and a series of stained glass windows bearing viceregal armorials was begun in the windows either side of the first-floor galleries. The creamy stone finish of the interior surfaces gave way to a polychromatic scheme, the most notable feature of which was an azure painted ceiling ornamented with gold stars.

On Christmas Day 1922 the Chapel Royal held its final service in the wake of the dissolution of the viceregal court, after which it fell into a period of dormancy and peripatetic use. It finally found a saviour in the unlikely person of the Roman Catholic Archbishop of Dublin, John Charles McQuaid (1895-1973). On 13 June 1943 he celebrated the first mass in the building’s history, after which it became a garrison church for the Irish Armed Forces and was renamed the Church of the Most Holy Trinity. It continued as such until 1983 when structural deterioration forced its closure. From 1983 to 1990 its architectural fabric was consolidated and restored by the architects of the Office of Public Works. The Chapel Royal remains today one of the great joys of a visit to Dublin Castle. Access to the interior is available by guided tour. The Chapel is also a venue for occasional performances and music recitals.

William Derham is a graduate of architecture from the Dublin Institute of Technology and a postgraduate of Building Repair & Conservation from Trinity College Dublin.  He was joint editor, with Dr. Myles Campbell, of The Chapel Royal, Dublin Castle: An Architectural History (Dublin, 2015) and was sole author of Lost Ireland: 1860-1960 (London, 2016).  He works at Dublin Castle

4 Malton, James, Picturesque and Descriptive View of the City of Dublin (London, 1794), letter press of the great courtyard, Dublin Castle