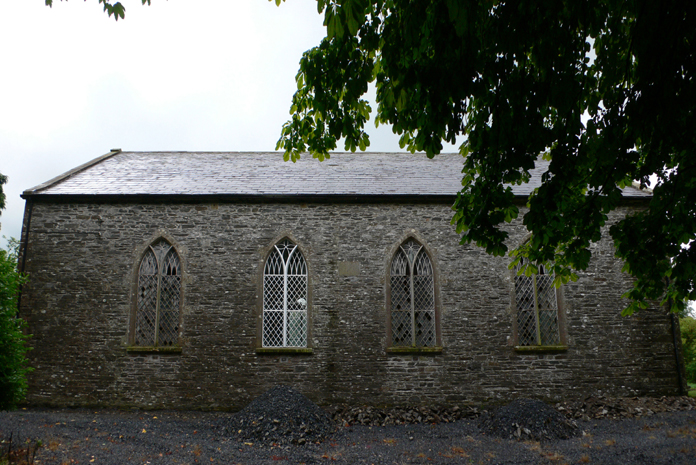 Cahans Presbyterian Church is a solid affair anointed with lichens of age on its ordinary grey stones. I first saw its imprint on the old Ordnance Survey map – a solid rectangle with an almost identically-shaped pond below, like a cookie cutter had attacked the map. Located in the townland of Lisnaveane, close to Sranooden, County Monaghan, the land rises up from the church hollow to a steep-sided drumlin where a bivallate fort dominates.

I loved the church the first time we met. Its pillars are cheeky and forthright in their pronouncement to “STICK NO BILLS”, diligently inscribed into the capstone. The fields are pretty and quiet around the church. There are not many people to instruct anymore, but the capstone speaks of a much busier time for the building and its surroundings.

I feel the weight and the lightness too, of people past and present at the church, more intensely here than at fancier, ornamented buildings. Perhaps it is because of the silence, broken only by the usual blackbird or song thrush which accompanies me on my visits, and the feel of the rough stone of the church. Dating from 1779, it is in a “barn” style, meaning that it has no transepts or projecting chancel. After entering through the wrought iron gates, it is the side elevation that confronts you with a row of four large pointed windows with timber Y-tracery, stone sills set at eye level.

This construction replaces or sits upon an earlier Presbyterian meeting house on the site, and there is evidence of the former building if you walk around to the front door and look at the left corner. Here the stone is thinner, poorer in quality, and even more well endowed with lichen embellishment, and tiny pebbles that have been pushed in to help the mortar do its job in the rather large gaps between the stones. It gives a textured effect that is very aesthetically pleasing, and like a small patch of fen, you have to get up close to appreciate it.

The front door is best described by the sonorous sound it makes when it closes, and by the heavy weight of it when you push it open. It is a door of serious purpose and construction, set within a square stone doorcase of English Gothic design, but looking Tudor. To me it seems out of place in a wonderful way with the rest of the building, almost like it came from a nearby castle and it would have been an immoral waste not to re-use it. This façade has a neat opening high above the front door, flanked by two arched windows, which can be best appreciated with a good crane of the neck. It emphasises the intent of the proposition of entering the church, of enclosure, of thinking good and high thoughts. The plaque directly above reads “GOD’S/PROVIDENCE/PROTECT US/JOHN ROGERS – /MA AD 1779”. John Rogers was minister here, erecting this, the very first Seceder Presbyterian Church in County Monaghan. It should be remembered that the Penal Laws were still in force at this time, preventing dissenters from erecting churches in towns, resulting in the dotting of the Monaghan countryside with simple churches like Cahans. Presbyterians were coming to the Ballybay area of Monaghan from the 1690s, mainly from Scotland and many were associated with the thriving milling industry “chained to the rivers” around Ballybay.

The building has been witness to arrivals and great departures. Momentous decisions for generations of people have been made here. In 1764, Minister Thomas Clark, following the death of his wife and child, led three hundred of the congregation to New York, an event known as the Cahans Exodus. They left by foot, walking to Greenore to depart by boat, and according to the church historian David Nesbitt, they all arrived safe and sound in America. They sailed on the “John” from Newry on May 10, 1764, and arrived in New York on July 28, 1764. By 1767, the majority of the emigrants had settled on farmland acquired for them by Doctor Clark in New Perth, New York. It appears they were dissatisfied at the situation with the established Church in Ireland, where they had to pay an annual stipend to support the Established Church, and also with the restrictive penal laws.

Inside, the church has a small room above the front hall and two expressive ogee-headed doorways into the main church. The original floor has recently been repaired by a skilled local carpenter, David Cousley, who managed to save most of the long lengths by trimming off only the very rotten edges. He has also painstakingly re-assembled the pulpit in all its glory to the top of the church, after it was dismantled following a ceiling collapse a number of years ago. The pulpit tells history in its functional construction. It has a special box for penitents to sit during the service. I sat in it. It feels exposed, uncomfortable, too close to the Minister, too visible to the imaginary congregation, too judgmental. The desired effect, I’d say!

The graveyard to the rear catches the sun, and has recent burials as well as historic ones, including a vault where Thomas Clark’s wife and child were laid to rest before his departure to America. This vault has intrigued some of us, its unusual design leading us to think that it might have previously been a Bothóg for saying Mass. The graveyard falls steeply away to the rear to the square pond below, which is possibly the source of the original stone for the church.

One of the most impressive things about Cahans is its local committee who have been fundraising and giving of their time to progress the conservation of the church. No longer is there a congregation of any great number, but the community has rallied around to help. One of the members of the congregation who died almost 100 years ago is David Nelson, a recipient of the Victoria Cross in the First World War. Due to his heroism he became the first Ulster man to be awarded a Victoria Cross. His VC citation reads: “Helping to bring the guns into action under heavy fire at Néry France on September 1, and while severely wounded remaining with them until all the ammunition was expelled”.

A blue plaque to commemorate David Nelson VC was erected at the church in September last, unveiled by Heather Humphreys TD, the Minister for Arts, Heritage and the Gaeltacht. Standing there in the late evening, listening to Andrew Carlisle playing The Last Post in his honour, was a moving experience. The land hushed, and the trumpet sang with melancholy for all those lost to war. I felt like the church itself was calling people home to it.

Shirley Clerkin is the Heritage Officer with Monaghan County Council