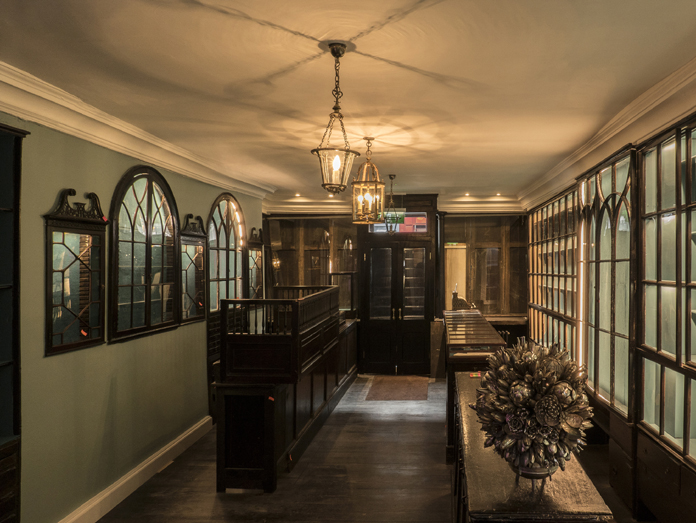 Thomas Read and Company can trace its long history back to the seventeenth century when James Read opened a knife and sword making premises on Blind Quay [Lower Exchange Street]. James’s grandson, John, inherited the business in 1744 and in 1750 purchased new premises in nearby Crane Lane where he continued the trade of cutler. The move to Crane Lane coincided with the transformation under the auspices of the Wide Streets Commission of the medieval core of Dublin from a densely woven warren of courts and winding lanes to a modern city of regular streets and red brick-faced townhouses.

Complying with strict guidelines ensuring uniformity of elevation, the house stands five storeys high over a basement with the ground floor given over to commercial use. The upper floors, two windows wide, are faced with red brick laid in a Flemish bond pattern and finishing in a parapet screening the roof.

A two room plan largely survives with the workshops in the basement boasting the grindstones, sharpening instruments and tools necessary for the manufacture of cutlery and cutthroat razors, scalpels and swords. The uppermost bedroom floors feature a large room at the front overlooking Parliament Street and a smaller room at the rear with a corner fireplace. Remarkably intact, each room retains original door and window casings, skirting boards and dado rails, and simple moulded cornicing.

Only the ground floor and first floor show evidence of significant alteration with the former remodelled at the turn of the nineteenth century as a single room by the removal of a partition wall. The principal reception room overhead was similarly enlarged and redecorated with a low-relief chimneypiece and low-relief frieze of sea serpents with intertwined tails. The rooms thus improved were doubtless of benefit to the customer and proprietor respectively but, over time, were ultimately to the detriment of the house itself.

Thomas Read and Company closed its doors for the last time in 1997 having supplied Dublin with the finest of metal ware for two hundred and fifty years. However, in addition to a priceless archive of documents and instruments cataloguing the history of the premises from its inception, the new owners took possession of a fragile house on the verge of collapse. Failing roofs had allowed rainwater to penetrate and rot the timbers and walls. Poor quality cement pointing had damaged the brick work. Joinery – the shopfront and windows included – showed signs of fatigue and minimal maintenance. Most alarming, with the removal of the ground and first floor partition walls, the three bedroom floors were resting on two increasingly brittle cast-iron pillars leading to movement and subsidence of up to sixteen inches.

None of the issues was unresolvable but simply required a dedicated team of specialists working on a carefully managed programme of minimum intervention and maximum conservation. The restoration of Thomas Read and Company was overseen by Kelly and Cogen Architects.

The most significant insertion – an endoskeleton of engineered iron work – is also the least visible but provides crucial stability and support to the exterior walls and internal floors. The restoration of the façade included the careful dismantling of the shopfront in preparation for its off-site repair by Paul Lawrence. The removal of the fascia had the benefit of uncovering, for the first time since the eighteenth century, a section of untouched brick which was used to inform the method for repointing the brick work overhead: a double scribed lime mortar joint. The restoration of the Parliament Street front was completed with the installation on the first floor of six-pane hornless sash frames in place of plate glass windows and the reinstatement of the repaired shopfront with its awning by The Victorian Awning Company.

The restored interior is a time capsule of the eighteenth century with private apartments decorated and furnished in a style that would no double meet with approval from John Read and his immediate descendants. The highlight of the interior is the shop with its glass-topped pine counters, symmetrical display of scroll-topped and arcaded cabinets, and ceiling framed by a chunky Cavetto cornice.

The restoration of Thomas Read and Company was awarded the Diaphoros Prize at the Georgian Group Architectural Awards in London in December 2017.