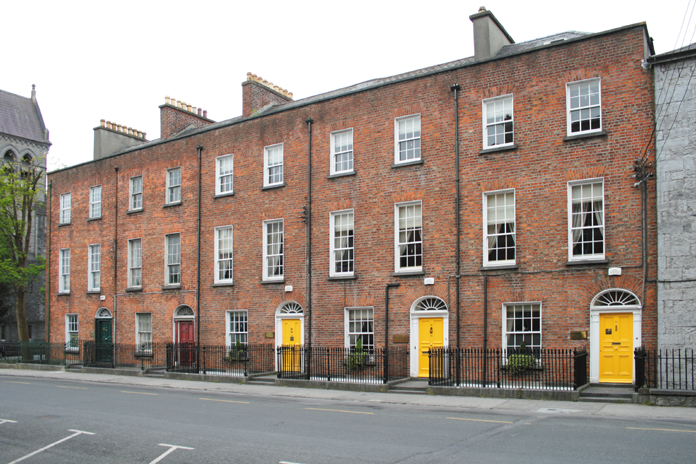 Ennis, County Clare, in the early nineteenth century was characterised by crooked narrow streets flanked by buildings of post medieval and eighteenth-century origin. One of the first formal streets came about when, circa 1823, William Greene (d. 1842), a local attorney, built for himself a sizeable house of rough cut limestone on land owned by Bindon Blood (1775-1855) just off Mill Road. The house shows a symmetrical frontage with a restrained doorcase as its centrepiece. The Classically-proportioned windows are simply dressed with tooled cut-limestone block-and-start surrounds. Contemporary deeds, directories and newspapers confirm the existence of the house in the late 1820s and early 1830s and it is shown, but not named, on the first edition of the Ordnance Survey published in 1842.

Figure 1: An extract from the Valuation Office Sheet CE033, based on the first edition of the Ordnance Survey (surveyed 1840; published 1842), showing the crooked narrow streets characterising Ennis, County Clare, in the early nineteenth century. One of the first formal streets came about when, circa 1823, William Greene (d. 1842) built a sizeable house on a site just off Mill Road. Later developments included two rows of red brick Georgian houses and the resulting Bindon Street is shown to the north of the River Fergus between two houses named as Springfield and Greenlawn. The purpose-built Provincial Bank of Ireland and Saint Columba’s Church followed later as did the perpendicular Bank Place

To the north side of the house, accessed from basement level, was an enclosed yard containing a three-horse stable and coach house along with sundry out offices. Also extending from basement level, running under what would become Bindon Street, is a large coal store. In fact, all of the houses in the street are furnished with vaulted coal stores and in 1941 it was suggested that they could be requisitioned as air raid shelters in the event of a German attack.

Figure 2: A view of the houses built on the east side of Bindon Street by a consortium headed by Charles Harvey Bagot (1778-1880), Land Agent for Bindon Blood, with a plaque recording 1832 as the date of construction. Numbers 3-4 were rendered in the twentieth century while numbers 5-6 show the original red brick Flemish bond finish. A later house built by Bindon Blood (1775-1855) was remodelled after his death by his widow, Maria, and the polygonal bay window and pedimented doorcase are clearly later alterations

It would take almost ten years before the next houses appeared in Bindon Street. Charles Harvey Bagot (1778-1880), Land Agent for Bindon Blood, could not find a suitable house in Ennis for his family and opted to build himself. He persuaded the County Treasurer and a local magistrate to join in a venture to erect four identical houses, on the opposite side of the street from Greene’s house, which he described as being equal to ‘London or Dublin second-rate houses’. Although the Georgian era was coming to an end, this was the style that was selected to build in. The houses, which are currently numbered 3 to 6 Bindon Street, are two bays wide; have frontages of four storeys over open basements; display red brick, possibly of local manufacture, in their construction; and show Classical doorcases with pretty fanlights at street level. 3 Bindon Street features a plaque giving 1832 as the date of construction. It, and its immediate neighbour, was rendered in the twentieth century and the windows decorated with simple Tudor-like hood mouldings: 5 and 6 Bindon Street continue to show the original red brick Flemish bond finish.

At some point in the following ten years another house was erected adjoining 3 Bindon Street. The builder was Bindon Blood who, up to then, had been living in Queen Street, Edinburgh. Griffith’s Valuation clearly shows that Bindon’s house was a larger and higher-rated house than its neighbours and that the under-street tunnels extended all of the way across to what had been Greene’s yard, but was now repurposed as a garden. Blood died in 1855 and over the next few years his widow, Maria, remodelled the house, converting it into two separate dwellings and possibly extending what ultimately became 1 Bindon Street. It is quite clear today that an additional door was inserted into the façade, but the main evidence for the alterations is in the Valuation Office Cancelled Books.

Figure 5: A view of the houses built on the west side of Bindon Street with the finance coming from a tontine, or subscriber’s annuity, to which the subscribers included Bindon Blood, Charles Harvey Bagot, Robert O’Brien (1809-70) of Dromoland, and Richard Boxall Grantham (1805-91), County Surveyor

In 1836 the west side of Bindon Street was developed with the finance coming from a tontine, or subscriber’s annuity, in a manner similar to the contemporary development of Pery Square in Limerick. The Articles of Agreement of the Bindon Street Tontine Company, housed in the National Archives of Ireland, specified that the land on which the new houses were to be built extended one hundred feet south from the gable-end of William Greene’s house. Five identical houses were proposed and twenty shares, valued at £100 each, were issued. Seventeen men took up the challenge, three taking two shares each, with the subscribers including Bindon Blood and Charles Harvey Bagot; local landowners such as Robert O’Brien (1809-70) of Dromoland; Richard Boxall Grantham (1805-91), County Surveyor; and also a local blacksmith and pawnbroker. Each subscriber nominated a young person and it would be the last surviving five of these who would give the subscriber, or their heir, the prize of one of the houses. In the meantime, for as long as the nominee was alive, the subscriber benefitted from the rents of the houses.

Figure 6-7: Although smaller in scale, 7-11 Bindon Street share qualities in common with the earlier houses across the street including a red brick Flemish bond finish; parapeted rooflines; and Classical doorcases with simple radial fanlights

As proposed, the five houses were identical in appearance and, although smaller in scale than their opposing neighbours, share qualities in common with the earlier houses in Bindon Street. The houses, numbered 7 to 11 Bindon Street are two bays wide; three storeys high over open basements; finished with red brick laid in a Flemish bond pattern; have fanlit Classical doorcases at street level; and conceal their roofs behind parapets.

Two further developments completed Bindon Street as we know it today and both were of a public nature.

Figure 8: Two later developments saw Bindon Street move from exclusively residential to mixed use. The purpose-built Provincial Bank of Ireland (1864), designed by William George Murray (1822-71), stands on the south-east corner of Bindon Street and resembles a small Italianate palazzo with its arcaded openings and corbelled roofline. The cool grey quality of the limestone construction appears to echo the palette of the house erected by William Greene on the north-west corner of the street

The Provincial Bank of Ireland had operated from 5 Bindon Street ever since it had established a branch office in Ennis in 1835. However, a purpose-built bank designed by William George Murray (1822-71), Architect to the Provincial Bank of Ireland, opened in 1864. Five bays wide and two storeys high, the bank features a snecked tooled limestone construction with sheer limestone dressings, particularly focused on the central porch. The arcaded openings on each floor and the corbelled roofline imbue the building with a sense of a restrained Italianate Classicism: certainly, the bank is less showy than the contemporary National Bank of Ireland building erected around the corner in what was to become Bank Place.

Lucille Ellis is a Dublin-based historian whose grandparents were from County Clare. Having worked on her family history for over twenty years, Lucille broadened her research to include the local history of County Clare. The Clare Roots Society, of which Lucille is a member, has published many local histories including Ennis at Work in the 19th Century and a series on the streets of Ennis. Lucille‘s book, Bindon Street and Bank Place, published by Clare Roots Society, is available in bookshops in Ennis and from the Clare Roots Society: www.clareroots.org