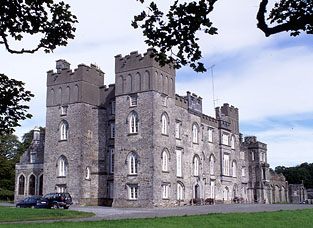 County Meath’s long history in farming is reflected in numerous country houses, farmhouses, outbuildings and stables scattered across the landscape. In nineteenth-century rural Ireland, the economic hierarchy that existed within the population was reflected in the architecture of the countryside. At the top of the pyramid there were the wealthy landowners in grand architecturally designed country houses, and at the opposite end were farmers of smaller holdings and cottiers – landless labourers. Dunsany Castle, of twelfth-century origin, would often undergo additions and alterations over the centuries, reflecting the changing tastes and needs of its owners (14403711).

County Meath is characterised by rich and fertile land, with fields bounded by hedgerows and copses of trees. The landscape is predominantly flat pastureland with a number of historically important hills. The suitability of its soils for agriculture has attracted farmers since the Neolithic period. Agriculture has shaped the landscape throughout the centuries, as farmers cleared forests to create fields, built houses and outbuildings, and laid out gardens. At the opposite end of the pyramid to the wealthy landowners, in grand architecturally designed country houses were farmers of smaller holdings and cottiers – landless labourers. These smaller farmers lived in single-storey and two-storey vernacular farmhouses, usually with outbuildings and a yard. The cottiers lived in small cottages of mud, stone and straw which were of a very basic, functional design. Although cottiers once made up seventy-six percent of the county’s population during the nineteenth century, these cottages are becoming extremely scarce; examples survive at Staleen (14402013) and at Red Mountain (14402702). 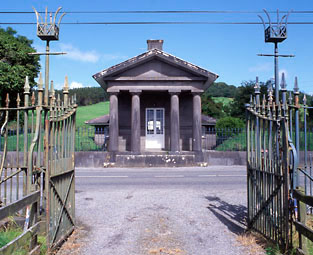 Gate lodges form an important part of the attendant structures within a demesne. These houses were built at the entrance to estates containing castles, large houses, religious institutions and industrial centres. Today many have been converted for use as private dwellings. The key to the gate lodge’s appeal is the individuality of each building. Many were built by the best architects of the day. There are lodges that are literally miniature fairytale castles and others that have the appearance of theatrical Gothic follies. Even the plainer lodges are likely to have additions such as finials and cresting on the ridge of the roof. At Moynalty, the former gate lodge next to Moynalty House gates is of substantial artistic merit with well-carved bargeboards and finials over the dormer windows and on the gable ends (14309011). Moynalty, with its colourful streetscape, is a reminder of how attractive painted render or pebbledash can be on buildings. 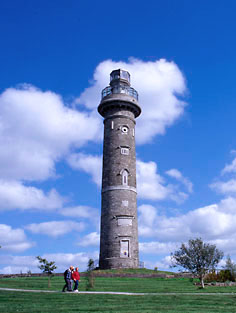 Part and parcel of grand estate building was the appearance of smaller, more folly-like structures. Some were constructed for purely aesthetic appeal while some had a more functional role. Although not generally regarded as a folly, the circular-plan dovecote in Hilltown Estate in Bellewstown (14320016), which dates to 1760, had a highly practical role in the provision of fresh food for the owner of the estate. Some of the most notable follies appear in the gardens of Larch Hill House estate, Kilcock. The follies vary from a gazebo, to a fortress, to a Greek temple, forming an eccentric group of structures – adding to the aesthetic appeal of the demesne landscape. ‘Gibraltar’ (14404906), a triangular-plan miniature fort, is set on a lake, while the ‘Fox’s Earth’. (14404904) comprises a folly and a mausoleum set into an artificial mound with a rustic temple above. Although they replicate a fantasy world, they sometimes had functional uses ranging from formal entertaining to simply enjoying the view. The Tower of Lloyd (1791) (14401601), near the town of Kells, and the gazebo at Herbertstown (c.1760) (14403301), follow similar aims. 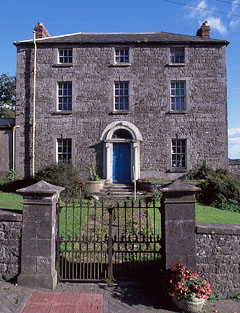 Slane is a charming estate village sited on the banks of the river Boyne. In the 1760s, the town was laid out on a cross-shaped plan at the junction of roads from Drogheda and Dublin. Viscount Conyngham, who resided in the adjacent Slane Castle (14401902), leased plots to builders, with stipulations regarding the type and scale of building to be erected. Slane is a coherent and attractive Georgian village, with four matching houses of squared limestone, facing each other diagonally across the main crossroads (14315020, 14315039, 14315044, 14315049). The village setting is complimented by; the rubble stone castellated entrance gates to Slane Castle (14315055) and, at the Dublin end of the village, by the bridge (14315063) and entrance gates to Slane Mill (14315058). Slane Mill is a very fine example of a mid-eighteenth century corn mill. The main mill building displays a level of carved detail that is unusual for an industrial building and more typically found in country houses of the period. 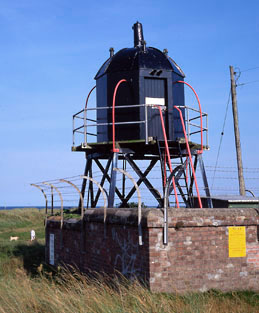 Within its narrow swathe of coastline, County Meath contains a number of interesting maritime-related structures. In 1838, the Drogheda Harbour Commissioners decided to erect lights at the mouth of the river Boyne. Three lights were erected but, due to the shifting sands, the structures had to be of a temporary nature. Originally simple timber constructions that could be easily realigned if necessary, iron was incorporated into the framing in later years to make them durable and less prone to rot. At the Drogheda East Lighthouse (c.1880) (14402101) the timber framing was abolished entirely and it stands today as a cast-iron lantern set on cast-iron supports. Associated in the immediate area of these lighthouses, and dating to the 1880s, are such structures as the lighthouse keeper’s cottage (14402102) and navigation beacons (14402104). The Tower of Lloyd (1791) (14401601), near the town of Kells, has lighthouse associations. Designed by Henry Aaron Baker, a pupil of James Gandon, it is thirty metres in height and, with its viewing platform and now missing beacon, it resembles a stranded lighthouse. It has been suggested that the tower was used as an orientation point for returning hunstmen.